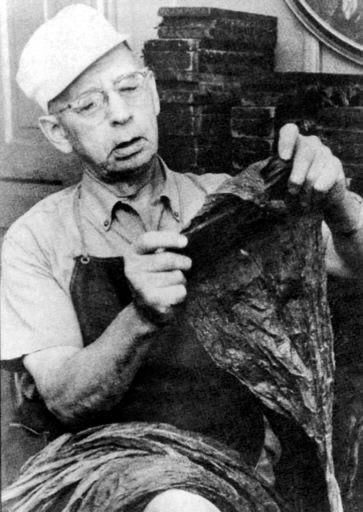 Harry Flinchbaugh of Red Lion’s Flinchbaugh Cigars was a hands-on owner. His factory, along with scores of other cigarmakers, helped Red Lion and other York County communities prosper in the first part of the 20th century. Red Lion may have claim to the top cigarmaking community. “Red Lion: The First 100 Years” notes that the peak number of factories in the borough between 1880 and 1930 was 150. (York County Heritage Trust photo.) Background posts: Cigarmaking Red Lion on top of York County and Red Lion’s Ebert Furniture: From bedroom suites to gunstocks.

York County has long put forth products that attract so-called sin taxes.
We have brewed beer in York, distilled whiskey in Foustown and rolled tobacco in Red Lion and scores of other locations throughout the county… .

In his “History of York County, Pennsylvania,” George Prowell included an insightful section called “Tobacco Culture.”
He writes about early 19th-century cigars made from inferior “shoe-string tobacco,” so-named because the the width of its leaf. Cigars made from this distasteful local leaf were named “tobies,” and often were given away free to diners at area inns.
Almost offhandedly, he writes, “They contained a vast amount of nicotine, the stimulating element in tobacco, and were doubtless very injurious to the smoker.”
Interesting that even in 1907, people recognized that tobacco was unhealthy.
Prowell goes on to make several other interesting points:
– Benjamin Thomas, a Windsor Township farmer, is credited with finding a better leaf, grown from Havana seed and properly fertilized. That came after 1837.
– This better product predated the more famous and plentiful tobacco grown in Lancaster.
– This new seed of tobacco grew best from Goldsboro along the river to East Prospect on the York County side and from Bainbridge to Turkey Hill on the Lancaster County side. Later, much of the crop was grown in the southeastern section of York County and east of York. Despite the growing success of the local crop, much tobacco had to be imported from other sections of America and Cuba to keep up with local cigar rollers.
– P.A. and S. Small, the major merchants and millers in 19th-century York County, eventually partnered with Thomas and his son, John F. Thomas.
– By 1906, cigarmaking and related businesses employed more York countians than any other industry.
– In 1907, 1,200 cigar factories operated in York County, rolling 300 million cigars and producing about $1 million in tax money for the federal government.
– Hanover, Red Lion, Dallastown, Yoe, Windsor, Hellam, Seven Valleys, East Prospect and York were the top cigar centers, but practically every small town played host to rollers.
For scores of additional posts on 19th-century living in York County towns, see this blog’s Small-town life category.

In about 1927, workers pose inside Red Lion’s W.C. Frutiger Cigar Co. “Red Lion: The First 100 Years,” the source for this photograph, said that Frutiger’s company stood at the location of the old Kaltreider Memorial Library’s parking lot. Women were predominant among cigar rollers around York County.