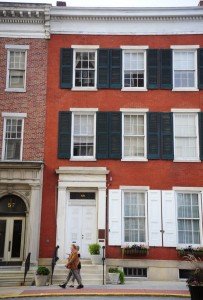 The Lafayette Club was founded in 1898 and started efforts to occupy the townhouse in 1912 (its deed was lost in the sinking of the Titanic causing a delay.)  Well, club officials said Friday that they are closing its doors. The club operated as an exclusive men’s retreat for most of its history, accepting its first woman member in 1992 and its first black member in 1998. Background posts: 10 years ago, York’s exclusive Lafayette Club became less exclusive, Part I, Part II and Part III.

Times have simply left the Lafayette Club behind.

Here’s a story to illustrate a piece of that and why the club is closing .

A longtime businessman told me that when he moved here, he used the Lafayette Club as a place to work. In transition, he did not yet have an office. So he had access to a phone at the club. He could meet business associates there. He could host dinner meetings.

But such settings are no longer needed.

With cellphones and laptops, an office can be anywhere. It’s common for people looking for a place to work in between appointments to use Panera Bread or BAM and other such public places, often called third places.

Further, businesses are much stingier with expense accounts. And when such a business meal is indicated, York County has sufficient fine dining eateries to choose from.

The exclusivity the club offered for decades is no longer treasured or considered an asset in the business world. In fact, it’s a liability – and, really, always has been. Many people are becoming comfortable – in fact believe it desirable – to work and play with those different from themselves.

Putting this into computer terms, the club operated in a closed source manner in an increasingly open source world.

The closure of the Lafayette Club does provoke a sense of loss for many in the community.

But it’s not the club itself that is – or was – the asset. It’s the magnificent building. That’s what must be preserved and put to productive community use.

“Do you think the days of private hangouts are giving way to more public ‘third places,’ Panera Bread and coffee shops, BAM and other bookstores, food courts at markethouses etc.? Where do you hang out when not at work or home?”

– For numerous yorktownsquare.com stories and photographs touching on the Lafayette Club, in full or in part, check out: Lafayette Club.

– For a look at the club’s most prominent furnishing, check out: Marquis de Lafayette. 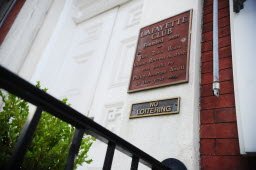 The Lafayette Club building has a noted Civil War history. The home of P.A. and S. Small made it to the pages of history when diarist Cassandra Small wrote about Confederate Gen. John B. Gordon’s horseback visit as she stood on its front steps: York’s Lafayette Club: ‘It’s not your father’s club … It’s historic. But it’s not prehistoric’.