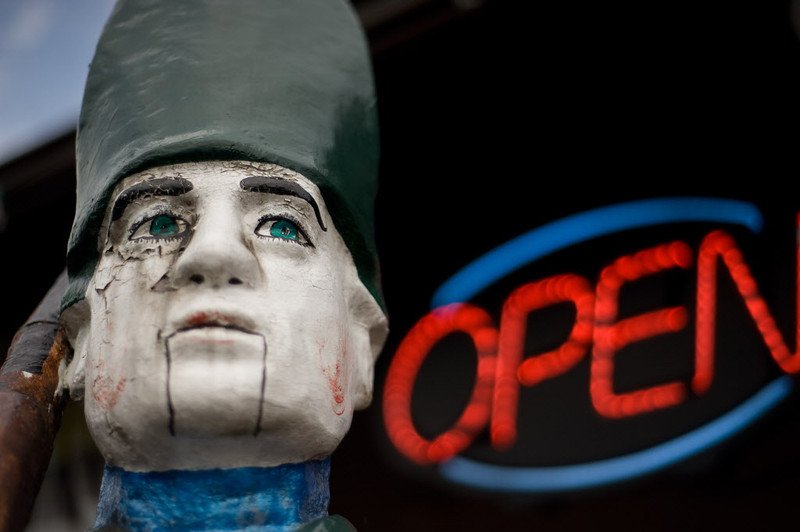 Gettysburg Battlefield Thrift Store uses large novelty statues as roadside attractions luring motorists into its Adams County parking lot. The Hanover, Pa., Evening Sun’s Media Center explains these oversized figures as well as shows five photos of the scene: ‘A life-sized dancing bear, an octopus, a whale and two Revolutionary War soldiers – not exactly what drivers would expect to see standing guard along a rural stretch of road just north of Gettysburg. It’s the kind of sight designed to make one do a double take at the collection of novelty statues acquired from amusement parks and golf courses in the region.’ Read more at: Novelty statue collection recalls time past. Also of interest: Roadside attraction on Route 30 designed to lure motorists.

I ran across this on Joan Concilio’s Only in York County blog: a post on Record Club of America.

I was a member growing up and remember getting the albums without dust covers and shrink wrapping. I learn from this post that those were measures to reduce costs. So that’s why the records were so cheap.

I also didn’t know until I moved here the Record Club of America was in Manchester, York County, Pa.

Endangered species? Drive-in movie theaters are becoming an endangered species as studios are sending out films digitally: It’s light out at drive-ins. Those old projectors are anything but high-tech. So it’s good to see the last York County drive-in – Haar’s – is open this weekend.

Gettysburg 150: The anniversary website powered by the York Daily Record/Hanover Evening Sun/Chambersburg Public Opinion is still up and bearing new stories and photos. In fact, it will become a permanent page on our sites. Check out: Gettysburg 150.

Big case: The case of the kidnapped baby – with ties to an upscale, rural York County neighborhood – has captured the attention of many York countians. Here’s a photo gallery of a news conference in which the activities of defendant – Ummad Rushdi – are discussed.

The YDR’s Sonya Paclob captures early days of YAIAA football practice with more than 200 images in less than 45 seconds.