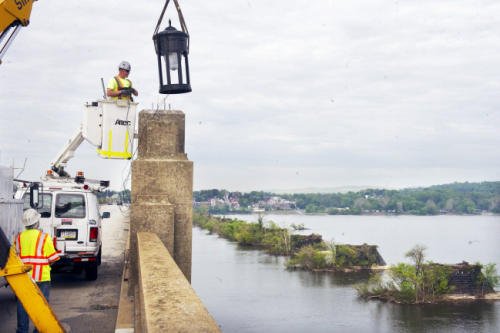 This view, courtesy of the York, Pa., Daily Record, gives an interesting view of replica lanterns as they’re placed atop the Veteran Memorial Bridge, aka the Columbia-Wrightsville Bridge. It also shows the old bridge supports, sans bridge, as they make their way across the Susquehanna River. The lights are designed to bring the bridge back to its 1930s appearance. The project will be completed in June with 65 lights installed. Officials say the lights are nice, bright and impressive-looking, according to a YDR story. Have you crossed the newly illuminated bridge? Also of interest: New throwback lights on Veteran Memorial Bridge.

The YDR’s Paul Kuehnel provides a look at lantern installation in this short video.

More interesting stuff from all over … .

Well, the labeling of York by the media continues. A recent Philadelphia Inquirer feature about local son Tom Wolf, Pa. gubernatorial candidate on the Democratic ticket, said this about York: “But to the residents of this hardscrabble industrial city south of Harrisburg, Lillie Belle Allen remains a symbol of the violence and racial hatred that raged here in 1969.”

I poke at such characterizations in this post: York hardly a hardscrabble town?

Here’s a YDR piece on the same topic that avoids such characterizations: What’s the deal about Tom Wolf, Charlie Robertson and the 1969 York riots? 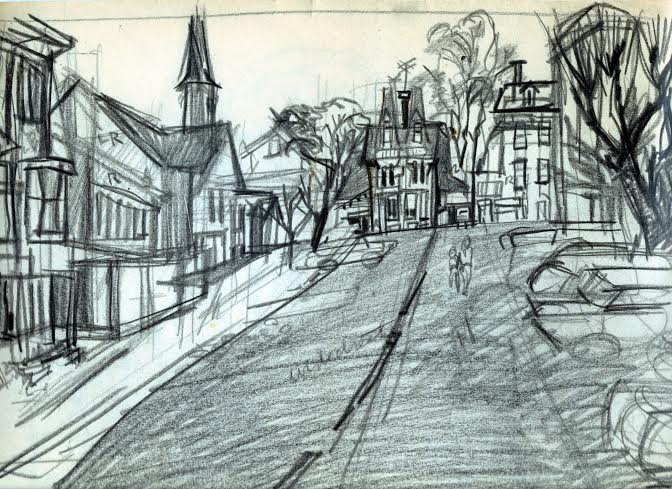 Artist Cliff Satterthwaite gave a look south on York’s Broad Street in 1965. This is a pencil on paper drawing. It looks like most residents backed into parking spaces then. They still do, but at an angle, called back-in angled parking.

Red Rabbit: This old-fashioned drive-in eatery in Duncannon, north of Harrisburg, received a recent profile in The Burg.

A neat thing mention in there is that the restaurant was part of the Distelfink chain before it became Red Rabbit.