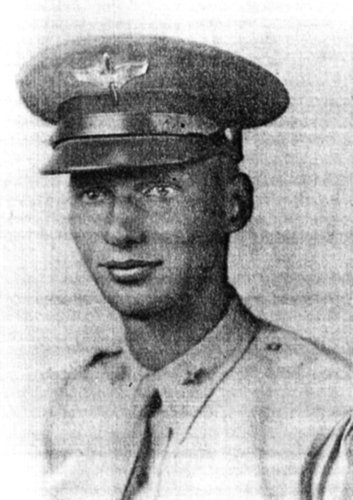 This picture of Spring Grove, Pa.’s, Rhodes Scholar Bruce McClellan appeared with those of other borough servicemen in the window of George Lau’s grocery store. The family donated those pictures to the Spring Grove Area Historical and Preservation Society, and they’re available for public viewing at the society’s museum. Also of interest:  Spring Grove museum displays horse gas mask and more.

But my recent assertion that there were three known Rhodes scholars with York County ties in a York Sunday News column brought forth another achiever – Spring Grove’s Bruce McClellan.

Ron Henry, part of a committed group of  history preservationists in Spring Grove, sent along a piece in the Spring Grove Area Historical and Preservation Society’s “The Historical Ripplet”  profiling McClellan.

As she has done so many times, Barbara Kling wrote the McClellan story in the November 2010 “Ripplet.”

Here are some facts about McClellan, according to the “Ripplet:”

– He was born in 1924, the son of William and Josephine McClellan. His father was brother in law of P.H. Glatfelter II.

– After serving as an Army Air Force pilot in World War II, he received a degree from Williams College and the Rhodes scholarship a year later.

– He spent most of his professional life as headmaster of the Lawrenceville School in New Jersey.

I’ve also reported that there is one known Nobel Prize winner with a York County background – J. Michael Bishop.

Am I missing any else?