Those were the days in York County, Pa. Linked in with neat York County history stuff – Aug. 31, 2011 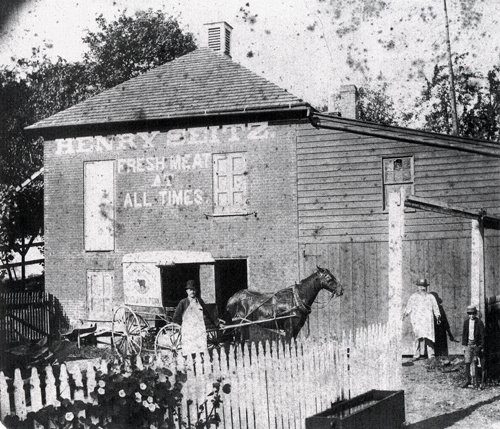 Before trucks and supermarkets, meat and produce was delivered door-to-door via wagon. Glen Rock’s Henry Seitz’s wagon is shown here. That’s Henry, center, near the wall. Sherman Seitz is at right and Oscar L. Seitz is left. Every town around York County had such deliverymen. David Seitz provided this photograph of his forebears. Also of interest: Of dinosaurs and big blue mailboxes.

Writer Wayne  inquired about information concerning a biography of J.W. Gitt, publisher of left-leaning The Gazette and Daily, predecessor of the York Daily Record.

“As you know, he (Gitt) was critical of Law Enforcement, but he and my Dad had a very good relationship,” Wayne wrote.

“One Sunday morning around 1970, Mr. Gitt found a “suspicious package” on his front door step. He called Dad at home because Dad was the only cop he trusted.

And here’s another Ruppert/Gitt story (edited) from Wayne Jr.:

Sometime in the early 60’s, Dad went to Gitt’s office to discuss an issue they disagreed on. The argument became so heated that Mr. Gitt’s staff thought the two men would come to blows. When the argument was over, both men acknowledged the other’s view point and shook hands. Then Dad said, “Let’s go for coffee.” Mr. Gitt accepted. Both men agreed that as professionals, they had to be able to discuss their disagreements, respect each other’s opinions, shake hands and then move on. Mom said Mr. Gitt’s staff was dumbfounded that the two men were yelling at each other one minute, then shaking hands the next, laughing as they headed for the coffee shop.

Rich stuff. Oh yes, the book Wayne is seeking is Mary A. Hamilton’s: “Rising from the Wilderness.”

Website of the day: A site is set up for people to view all the filings for the Stewartstown Railroad. A battle is raging to keep the intact shortline railroad intact. Visit: Surface Transportation Board

This is the URL for the site containing all of the filings for the Stew. RR.

Recommended blog post of the day: Yorkblogger June Lloyd writes about the USO that operated in York in World War II.

Forum of the day: Exchangers are discussing food at the York Fair.