Two hundred years after Thomas Paine’s death, the pamphleteer is due a marker in York 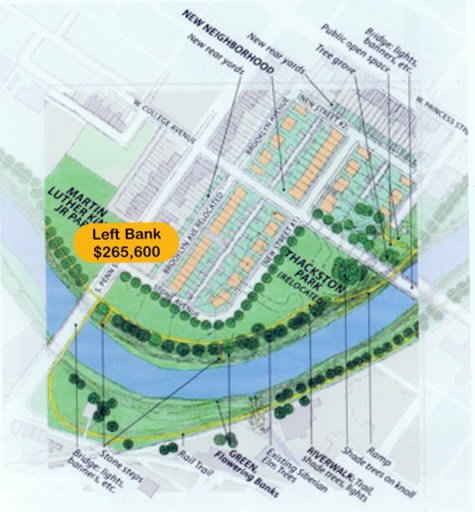 This graphic from the “Recapture the Riverfront” booklet shows Martin Luther King Jr. Park. The Cookes House, where Thomas Paine reportedly stayed, sits to the left of Penn Street in the west corner of the park. It’s now in private hands. Background posts: Helen Reeves Thackston’s name lives on and Worker saved key historical surveys from Glatfelter pulping machine and York’s housing stock not that revolutionary.

Carl Huber’s recent e-mail raises a good question.
The 200th anniversary of pamphleteer Thomas Paine’s death is coming up.
Are there any historical markers in the York area observing his time here during the American Revolution?
The short answer is that there are none… .

A search of a marker via the Pennsylvania Historical and Museum Commission’s Web site shows several monuments linked to Paine in New Jersey and Maryland, one in Philadelphia and one in Lancaster. But none in York.
About a dozen markers in York’s downtown link the town to the American Revolution. When Continental Congress meets in your town for nine months, that’s going to happen.
A possible reason that no marker for Paine has emerged over the years is that it’s not certain where he stayed. Tradition links him with the Cookes House in southwest York, but no solid evidence places him there.
Thomas Paine’s late-life radical religious beliefs – or disbeliefs – also have caused some Americans to disparage his legacy.
“He had lived long, did some good and much harm,” a newspaper said upon his death.
But York County histories regularly tell of his presence here in the spring of 1778. And a good handful of his letters have York addresses, so there’s no doubt he was here.
Indeed, he did some good work when he was here.
He later said he worked on the tract “Crisis V” in York, as well as part of “Crisis VI.” “Crisis V” sought to bolster the reputation of Gen. George Washington when the commander in chief authority was at low ebb.
It’s simply time for a Paine marker somewhere in York’s downtown.