This York City house was not a church or Masonic lodge. It was the Menough house 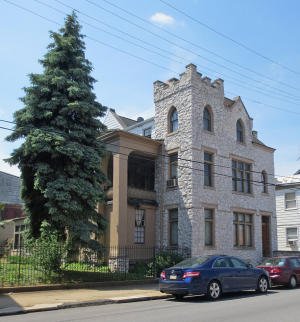 This house at 448 W. Philadelphia St. in York, Pa., was building in time to be included in ‘The York County Sesquicentennial Book – 1749-1899. The souvenir book specialized in photos of city people and noteworthy buildings. ‘It is a solid, stone building in a block of row homes. Most people think it is a church or some sort of citadel, perhaps a former Masonic lodge. It is, indeed, a home,’ York, Pa., Sunday News columnist Gordon Freireich wrote. Also of interest: Check out these yorktownsquare.com posts touching on columns Gordon Freireich has written.

The headline on a recent Gordon Freirech column (6/28/13) caught my eye: ‘The most unusual house in York City.’

That’s saying a lot in a city filled with wonderful architecture.

“In a book John Zimmerman shared with me, the house literally jumped off the page,” he wrote.

Here’s the rest of the story, as Gordon told it:

Built by contractor J.L. Menough, it was designed to make an impression and a statement. How many other Gothic Revival-Tudor style buildings are in York County?

According to Alycia Reiten, executive director of Historic York, Inc., the home’s “three story walls are constructed of randomly placed, uncut quartz. The roofline is complex and includes a parapetted dormer and a crenellated tower. The Tudor-style windows are large with heavy, wooden frames; some are triple. The southwest elevation, which faces a small alley, has numerous stained glass windows, with Gothic arches, as well as a cross in the gable end. Although the building looks like a church, it was always a residence and appears that way in the 1903 map of the city.”

Samuel and Cindy Myers are the current owners of the home. “We are only the fourth owners,” Sam said. Menough sold it to the Lehman family and eventually it was purchased by a Lehman son. The Myers family bought it from the executors of the Lehman estate in 1995.

The home was actually built to house three apartments. The Myerses now occupy one apartment and rent out the other two. John Zimmerman and Dan Meckley both recall York Corporation trainees living in the apartments in the house, which is across the street from the former company.

According to the records at the York County Heritage Trust Library, Menough built the chapel at St. Matthews Lutheran Church (of which he was a member) on West Market Street, so there is probably more than a coincidence that the house looks like a church.

Menough also built the Colonial Hotel on Continental Square, the Fluhrer Building on West Market Street and Cherry Lane, and the Jefferson and Hartley schools. His son, Luther D. Menough, built the Strand Theatre. When the older Menough died, he was called “one of York’s most active contractors and builders.” He began his company in 1878, retired in 1920 and died in 1927 at the age of 74. As much as he may have tried to impress the community, he is not included in Prowell’s biographies of prominent Yorkers in 1907.

Today the home looks very much as it did in the 1899 photograph, except for the added enclosed, stucco portion section on the east side of home.

How the Myerses purchased the building is a story of its own. “We lived in York New Salem and had one or two apartment houses at the time,” Sam Myers says. “(Cindy) saw the ad in the paper (for 448 W. Philadelphia St.), and we went to take a look at it. ‘This could be pretty neat … to try living in an older house, see what it would be like.'”

Cindy adds, “We could move in here and have the option of building another house.” The Myerses fell in “love with the city and we wouldn’t think of moving out.”

Check out these stories and photos about unsung landmarks in York/Adams.