This sports moment surely shows York, Pa., at its best: The hop seen around the world 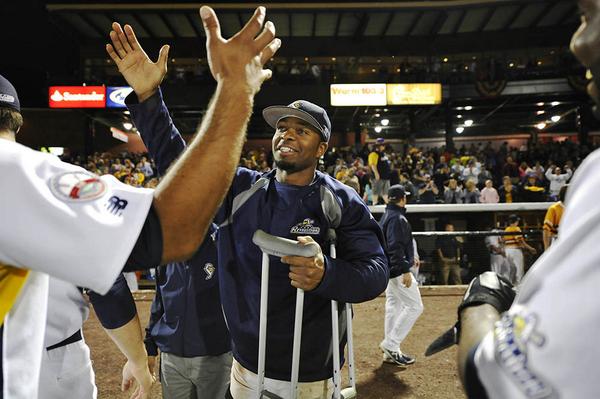 The York Revolution’s Sean Smith is seen after the Revs pulled out a win against Sugarland in Atlantic League playoff action on Sept. 26. In the 8th inning, Smith had tied the game with a homer over the left field wall and hopped around the bases, a scene viewed hundreds of thousands of times in homes around the world. He injured himself rounding first base after running out the hit, not aware that the ball had cleared the outfield wall.  Check out this photo and others as part of the York, Pa., Daily Record’s Kate Penn’s coverage of the dramatic game. Also of interest: Three photos surely show York, Pa., at its best.

This moment surely shows York, Pa., at its best.

And underscores the importance of baseball in York County.

In Atlantic League playoff action Friday night, Revs outfielder Sean Smith, hustling out a hit, tore his ACL. The hit was a homer, and Smith hopped around the bases.

He was mobbed by his teammates as he touched home plate, carried off the field. The 6,000 fans in the stands went nuts, and the Revs went on to win the game in extra innings.

It will be a sports moment that will be stamped in the minds of York countians forever.

Sean Smith’s hit, hustle and hops provide lessons for everyone who saw it live or via video replay.

It shows how sports can bring together a community, giving a common language and experience. The crowd was still buzzing at Saturday’s game. For a moment, the considerable challenges facing York County were forgotten.

And consider Sean Smith’s hustle with the game on the line. Never take good fortune for granted. And when misfortune hits, make the most of it.

Baseball, York, Pa., style, will be viewed well over a million times on YouTube. That traffic was boosted when ESPN picked up the moment with this caption: “Sean Smith of the York Revolution hits a game-tying home run in the eighth inning then tears his ACL, but still manages to make it around the bases.”

The ESPN announcer noted this was Smith’s 15th season in the minors and ended his commentary with: “Perseverance professionally and in this game particularly.”

In York County, this sports moment will always be known as “The Hop Seen Around the World.”

The video that caught the world’s attention. By this morning, it had about 860,000 plays on YouTube.

Check out these photos and stories about the York Revs in past York County headlines.