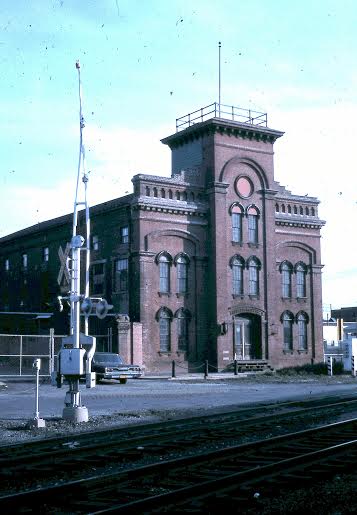 Artist Cliff Satterthwaite sent in this undated photograph from a color slide (remember those) of a mystery building. Well, the car in this picture indicates it was from the 1960s or 1970s. And the building, now greatly remodeled and expanded since Cliff Satterthwaite moved away, is the York Academy Regional Charter School.  Here, it’s still the Smyser-Royer foundry aka Variety Iron Works.  This building and neighborhood, in the stadium district, is one of York, Pa.’s, brightest success stories. The artist thoroughly documented York County from the late 1950s to early 1980s, and now resides in Virginia. Also of interest: These photos show the Smyser-Royer property before renovations in the past decade. And check out this is a post-renovation photo.

Love this kind of mail … showing that all roads lead to York, Pa.:

Sue Chehrenegar recently received  a Christmas gift – “Tradition,” a book about the musical “Fiddler on the Roof” by Barbara Isenberg.

Sue wrote: “On page 162, she reviews the journey for a revived stage production that was sponsored by Maryland based Troika Entertainment. That series of productions played in scores of different cities between 2004 and 2012. One night it played in York, PA. After that touring company left York, it traveled to Williamsport, PA and then to Akron, OH.

“As a side note, I would like to add that the book’s acknowledgment section also mentions someone with ties to York. For assistance with any computer problems, Ms. Isenberg had turned to Casey Chehrenegar.”

Sue wrote that Casey’s mother was born at York Hospital, daughter of Donald and Dorothy Hershner.

Philip Lisi, a Lancaster County resident with family ties to York County, is looking for the number York’s Methusaleh Lefty George wore as a baseball player for the York White Roses.

He found this in his research: “In his first starting assignment, June 16, 1943, Lefty pitched a three-hit shutout against the Lancaster Red Roses. The third baseman for Lancaster that year was future Detroit Tiger star George Kell, on his way to a .396 batting average in the Inter-State League. Kell put together an impressive consecutive-game hitting streak while winning the batting crown. It was ancient Lefty George, with help from Joe Narieka, who finally held Kell hitless, halting the streak at 32.”

I suggested he contact the York County Heritage Trust Archives, the York County Sports Hall of Fame and former White Roses announcer George Trout. If you can help, let Philip know or comment below.

History Mystery: Can you locate this old steam bakery?