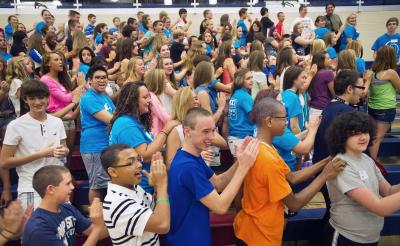 No one can accurately say that racism has been effectively addressed, or even significantly reduced, in York County, Pa.

It’s still there deliberately or inadvertently, fueled by our geographic placement on the Mason-Dixon Line, where North meets South.

But there are decisive moments from our past that provide glimpses of progress, moments of hope.

One came in 1941 when York County welcomed famed singer Marian Anderson after the black contralto was denied the opportunity to sing at Washington, D.C.’s, Constitution Hall and subsequently performed at the Lincoln Memorial.

The memorial, of course, was the site of another major American moment from 50 years ago last week when Martin Luther King Jr. delivered his “I Have A Dream” speech. (See below.)

The picture, as usual, says 1,000 words and provides a snapshot of racial progress in York County.

Two insights from that snapshot:

First, 50 years ago when Dr. King gave his speech, the census in Spring Grove schools would have shown virtually no racial diversity.

That is changing and, in fact, some York County high schools outside the city show a minority census of about 20 percent. This diversity gives students a real-world education. The ability to interact with people who are different from themselves stimulates learning and understanding that will serve them well as adults.

Also, one can say with certitude that had there been diversity in rural York County schools as Dr. King gave his speech 50 years ago, no exercise such as the one pictured here would have been scripted by the school.

Students of different races scratching one anothers’ backs might not have been permitted in that school – or probably any York County school. And if the school would have permitted that close connection, any photo like that in the newspaper would have brought an outcry.

I believe the York Daily Record’s predecessor, The Gazette & Daily, would have run such a photo – as the YDR did on its front page recently. The Gazette & Daily reported times when blacks were banned from the Boys Club Pool in 1948 or were not permitted to enter local eateries. The most famous example came in 1941 when a trumpeter and a stagehand with the famed Gene Krupa band were banned from eating at a North George Street restaurant.  Both segregationist moments are remembered by people alive today.

In my nearly 25 years in York, I can remember receiving phone calls or letters when we published such a photo.

So maybe a piece – you judge the size – of King’s dream is gaining traction.

The story, with photograph, ran in the YDR’s print edition and ydr.com and drew only one online comment:

“This is awesome! I knew I had a reason to still be proud of Spring Grove!”

Check out this gallery: ‘I Have A Dream: 50 Years Later.’