This P-61 Black Widow looking for a kickstart 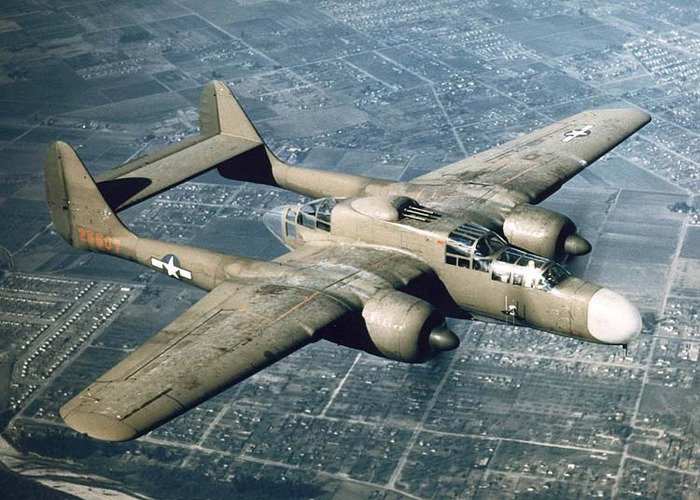 This is a World War II-era P-61 Black Widow. Elyse Pollick, a volunteer for the Mid-Atlantic Air Museum in Reading, said only four such planes survive and all of them are museum pieces. The Berks County museum has launched a fundraising campaign to restore its Black Widow to flying status. We mention this on this York County blog for several reasons. We cover vintage aviation here, wherever planes are flying or in museums. And Elise is a development specialist for Martin Library. She and two other Yorkers have organized a Kickstarter campaign (source of this photo and video below) to restore the plane. And Russ Strine, president of the museum, is from Stewartstown. Remember, all roads lead to York County. ‘We’d like to spread the word around the Central PA community because it is such a rare, cool aircraft that many could really appreciate and enjoy,’ Elyse wrote. Mission accomplished here. Also of interest: Barnstorming aeronauts floated in balloons over York County in 1800s.

The Kickstarter campaign to raise funds for the Black Widow restoration is $35,000. With 24 days to go, more than $7,500 has been pledged. Donation details: Kickstarter. ‘I’ve been volunteering with the Mid-Atlantic Air Museum in Reading for about a year now,’ York countian Elyse Pollick wrote. ‘The Museum puts on one of the largest World War II airshows in the nation called World War II Weekend, which I’ve attended since I was 12 (I was living in Ireland last year — I even changed my flight so I could make it!).’

Here was an intro I wrote to the blog post on YDR.com:

“York County had more than 300 of old mills of all types.

“Grist and woolen. Those with overshot wheels and turbines. Some are apartments now. Others house business. Some are no more.

“Communities grew up around these old mills that served as types of public halls, places where people came together.

“So here’s is a Cliff Satterthwaite watercolor painting of one old mill that people know about because of the road that has taken on its name.”

Memories flowing: Those often-abandoned boxy gas stations that are still seen on old roads around York County? They bring back lots of memories, as seen in Joan Concilio’s Only in York County blog post: York County service stations.

Another history mystery: Yes, it’s a mystery why some Facebook posts of past YorkTownSquare.com stories and photos get lots of comments and sharing and others, like the one below, do not draw attention. So YorkTownSquare viewers – and there are lots of you – feel free to engage!