They aren’t making the Hoke Houses of the world anymore 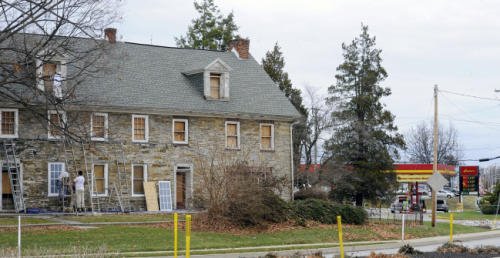 Preservation work is underway on Spring Grove’s Hoke House, the landmark 18th-century stone building that some folks remember as that area’s former library. Or maybe we should say, stabilization work is underway. At any rate, there’s a plan to keep this venerable Pennsylvania building in place dependent on meeting certain conditions. Also of interest: Spring Grove farmhouse awaits decision on its fate.

It’s a story that could have a happy ending.

An old, unused farmhouse is purchased by a convenience store operator with roots in York County as deep as the stone building at risk. Rutter’s plans to demolish the Hoke House, but preservationists, many of them from the grassroots, urge the business to hold off.

A plan is developed to preserve the farmhouse, if conditions are met. A fund is set up to raise money to meet those goals. Meanwhile, local preservationists are stabilizing the landmark. It’s a story which shows patience from the business, mobilization from the bottom up and a lot of present and future sweat equity.

Will this story have a happy ending? It must. They just aren’t making 1700s Pennsylvania farmhouses anymore.

This story has the conditions preservationists must meet:

‘Deal reached to preserve Hoke House in Spring Grove/ But group has only until Dec. 31 to bring historic structure up to borough code’.

Excerpt from that editorial:

“Don’t be fooled by those new windows recently installed at the historic Hoke House on the Spring Grove traffic circle.

“They aren’t windows. They’re plywood (which makes a better door than a window). The plywood panels are cleverly painted to look like windows, trompe l’oeil (trick the eye) style.

“So, actually, go ahead and be fooled by the ‘windows.’

“That’s the intent — and they certainly look nicer from the road than the previous plywood window blockers.”