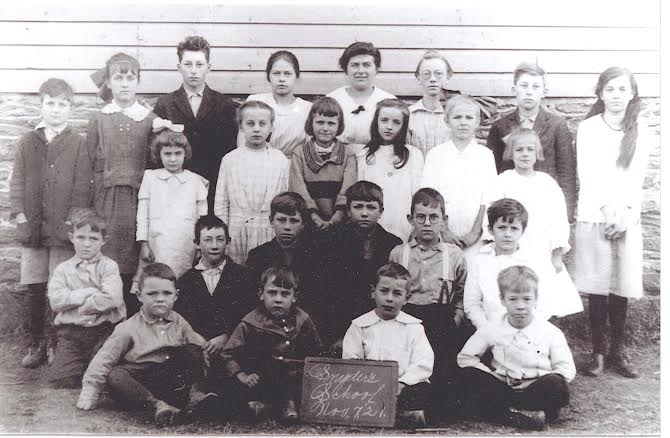 One-room schools intrigue and captivate York countians. More work is needed to inventory and identify these 300 or more sturdy structures that were a way of life in York County, Pa., from the 1830s to the 1950s. Then we must learn about their impact on York County some 60 years after the last one closed. One such school is pictured above. Glen Rock’s John ‘Otts’ Hufnagel studied the whereabouts of this old building, identified it as Snyder’s School. It was located off Route 216. ‘If you come out of Glen Rock, pass the old Foust Distillery about half a mile, there is a road to the left called Rishel Road. If you go up Rishel Road and start down the backside of the hill, it was back in there is what I was told,’ he wrote in an email.  This photo, from Nov. 7, 1921, includes  Lewis A. Lentz, far right, second row, and his sister, Erma Lentz, third from right, third row. Also of interest: Check out these stories and photos about York County’s one-room schools. and York County’s one-room schools represent a master’s degree waiting to happen and Part I: More history topics ready for graduate thesis.

I recently ran across a past Gettysburg-based Civil War Institute’s presentation schedule that listed a speech with an intriguing title.

That 2013 speech, by noted scholar Gary Gallagher, was titled:  “Is There Anything Left to Say About the Battle of Gettysburg?”

I immediately applied that to York County. Every year, a half dozen or more books are published about York County topics.

Twenty or so books have been devoted to York County’s role in the Civil War since 2000. The York County Heritage Trust produces an annual scholarly journal that drills down into four or more topics.

So is there anything left to say about York County’s history?

The short answer: We’ve broken through the crust, but there’s much more digging to do in the quest to understand our county’s past, how that made us what we are today and how that informs us as we look to the future.

Scott Mingus and Jean Hershner Brannan have put forth scholarly work on the massive U.S. Army General Hospital that operated on Penn Park in the Civil War.

Mingus, Lancaster countian Randy Harris and Adams countian Debra McCauslin have teased out difficult-to-find information on the Underground Railroad in York County and the region.

Yet much remains to be done on those big topics, as those researchers no doubt would be quick to say.

As they say in the digital world, there’s still plenty of room in those spaces.

In the past, I’ve put together lists of topics that would make great graduate theses.

I’ll do that again in a minute. Now, I’ll introduce another topic calling for an academic look: Jim Crow practices in York County in the 20th century and their legacy in the 21st. Jim Kalish’s “Civil Rights in York, Pennsylvania” provides a survey over 250 years for a researcher to pick up.

In a schedule of festivities, he put forth: “It’s on with a Big Time Friday Night for the Colored People at the Armory, N. George Street, Across the Bridge.  Free dancing.  Prizes for Cake Walks, Pie Eating Contests.  Ice Cream and Cake for all.  It’s all Free on HAINES.”

In those days, you might say, such separate activities were unfortunately commonplace, so Haines was following the practice.

But then you learn from a 1930s newspaper account of Haines’ favorite game at the York Fair. He liked to unseat black men in a dunking machine called “African Dip.”

And you have Codorus Street residents say on a panel earlier this year that they went with their parents to certain York stores and eateries because the adults knew the parts of these establishments where black people could and couldn’t go.

And you have Voni B. Grimes writing in his “Bridging Troubled Waters” about getting hand-me-down textbooks from all-white elementaries with pages missing at Smallwood school, his segregated elementary school.

Grimes has told this story many times: One day, Smallwood teacher and principal, Mr. Hopewell, asked his class to turn to Page 22.

That page was missing from Voni Grimes’ book. Turn to Page 11 two times, the principal said with a smile.

Researching Jim Crow in York County is an urgent matter. Those who were most impacted by segregation practices are aging.

So a lot has been written about York County’s past.

People who like history are urged to pick a topic, live in that era and then make your work public for others to enjoy.

One can safely assert: There’s a lot left to say about York County history.

Coming tomorrow: See a list of topics that really should be studied more!

Much study of the Dempwolf brothers, designers of the old York County Courthouse, has been done. But their work – and the way they worked – is a bottomless topic to study. (For more postcard views of York County, see: YDR Media Center.