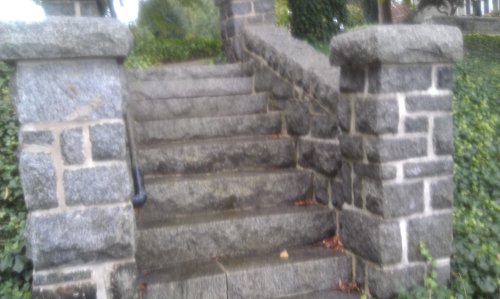 These steps led to a York-area mansion, which like other structures in this series, is no longer here. Hint: It was on York’s south side and has since been subdivided. It’s named after it’s original owner. (See below for the answer.) Also of interest: These old York County steps, Part III: Where did they lead?

Blake Stough, over at PreservingYork.com, updates readers about some changes at the Shady Dell, York’s former southside teen hangout.

Further, he came up with a Shady Dell banner that many York countians might remember. It was on the Dell’s stand at the York Fair.

“This is a prime example of how a piece of history could have easily been tossed into the trash without a second thought,” Blake wrote. “I’m thankful that it has been saved and hope it serves as a reminder that one man’s trash is another man’s treasure.”

America’s spirits: The National Constitution Center in Philadelphia has opened an exhibit titled: “American Spirits: The Rise and Fall of Prohibition.”   Interesting, the impact of Prohibition on York County has never been studied. That would be a topic worthy of a master’s thesis. Why York County? That’s because the culture of beer brewing and whiskey making was big in York County, an agricultural county near major cities to the south and east.

Forum of the day: Chronic wasting disease has some hunters worried about the deer herd: If you’re a deer hunter or have deer hunters in your family, what does the presence of this tough-to-eradicate disease mean to you? Please comment below.  York County suffered through another threat to its deer herd  -the  deadly blizzard of 1772.

Artist in the news 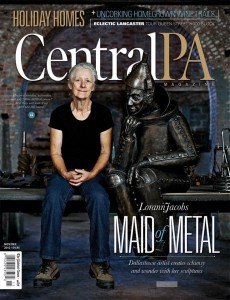 Answer to steps photo above: A.B. Farquhar was Mr. Big in York County in the 30 years on each side of 1900. And he had an estate, Edgecombe, that verified his status as a major industrialist. The estate has since been carved up into Farquhar Estate, in the hills south of York. These steps led to his mansion, long demolished with a more modern home resting in its space. Watch for other evidences of Edgecombe in an upcoming yorktownsquare.com post. See this photograph of Edgecombe before the bulldozer arrived.