These old York County steps, Part III: Where did they lead? Linked in to York County history, Nov. 7, 2012 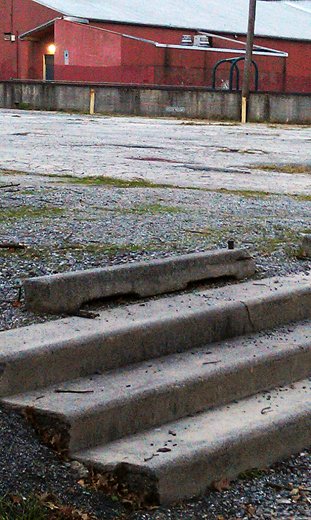 At one time, thousands of feet a week ascended and descended these steps in York. Now the destination point is gone, but the steps remain. Where did they lead? Hint: That’s the Voni B. Grimes Gym on College Avenue in the background. (See answer below.) Also of interest: Part I, These steps … . Part II, These steps ….

Got a news release the other day about Todd Andrlik’s book on the Boston Tea Party. He tracked this pre-Revolutionary War event via reports in newspapers.

What struck me the most about this work is its title: “Reporting the Revolutionary War: Before It Was History, It Was News.”

That sums up a lot of what I try to do on this blog. I try to identify news events and people in the news today that might be remembered by historians in the future. Coverage of pop artist Jeff Koons would be one example. History may refer to this York County native as comparable in the pop art field to Andy Warhol. So we follow him closely on this blog.

As for Todd Andrlik, the author is also the curator and publisher of RagLinen.com, an online museum and educational archive of historically significant newspapers starting in the 16th century, according to the release.

Goodbye kisses: Parts of the old chocolate factory along Hershey’s main street are coming down. (But the trademark smokestacks and those “Hershey Cocoa” bushes will remain.)

Blog post of the day: Stephen Smith over at YorksPast is doing some interesting work on one-room schools that were everywhere in York County before World War II. He’s even documenting that some schools up and move to new sites – or someone up and moved them. Raab’s School, that little red schoolhouse in York Township, is one of them. 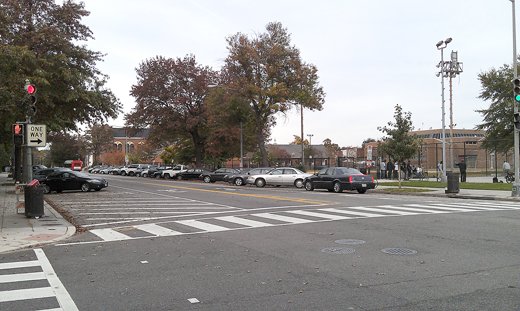 Yorktownsquare.com recently had some fun with back-in angle parking on Broad Street in York, a rarity around York County and an exceedingly difficult parking maneuver to undertake. But it’s around the region, too. We know it’s on Pottstown’s main street. It’s also near 11th and Q streets in Washington, D.C. Maybe it will become a fad.

Answer about these old steps, above: Those steps led to York’s City Market, a Dempwolf-designed building with a tall tower. That markethouse, one of five in York, was demolished in the 1970s. The main part of its footprint has never seen another occupant. It’s an open lot today, and that’s where these steps lead. You can almost see the steps in this image. Do you have any mysterious photographs of steps? Send them to jem@ydr.com.