Those 1912 drivers and other stories around Glen Rock, Pa. 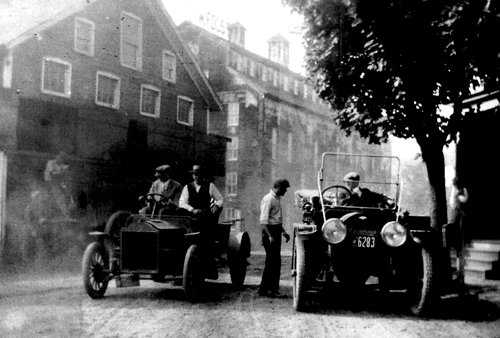 Donald Swartz’s humor comes out in this description of the scene in Foustown, a town outside Glen Rock, Pa., built around a distillery. Here’s what he wrote in a label for this photograph, which hangs in a museum in the Arthur Hufnagel Public Library in Glen Rock: ‘In 1912 the loop seems to have been around the Foust Distillery. The neighborhood is clearly jammed. It could be, though, that the driver of the car on the right just pulled over to mail a letter in the box next to the tree, and the people in the other car are simply unhappy about having to swing around him as they rocket through the grounds at 15 miles an hour, raising the required clouds of dust. The driver of the speeding, windshieldless car on the picture’s left seems to be fumbling for the bulb on his air horn. It seems a little late for that. His passenger looks to be preparing to leap out, possibly to bend the license plate back under the car in case there’s a policeman around braced for ticketing. Or perhaps he’s planning to plain old punch somebody. These 1912 drivers!’ Also of interest: ‘Rocks in the Glen’ turns out to be a place where things happen.

And those historical interests were just part of his talents.

Later, he served as mayor of Glen Rock, which has been described as his “final hometown.”

His writing is a particular legacy… .

He penned the often-humorous and always enlightening labels for photographs in the Glen Rock history exhibit that is just outside the doors of the town’s Arthur Hufnagel Public Library.

Glen Rock historian John Hufnagel offered to scan photographs that accompanied the labels for the newspaper.

Don Swartz’ word pictures tell Glen Rock’s story so effectively that the photographs are not necessary. To twist, the cliché: His words are worth a thousand pictures.

I hope these excerpts from Don’s work drive you to read more at the museum — and look at the photographs, too:

– Ah the trains! Without them, and William Heathcote, and his mill, it’s possible Glen Rock wouldn’t be anything more than a wide place in the creek.

– Amos Bubb, Jeweler, who had also, in 1906, become the York and Adams Counties agent for the redoubtable Maxwell motor car. In 1913, Seigman and Wherley became the York and Adams Counties agents for the Ford. Between those two auspicious events, this picture of the Ox Roast Parade was taken, about which we have little other word except for its being a significant annual social occasion, benefiting all but the ox.
– In 1904, a total of 210 Norway Maples were planted on the school hill, one for each student at the school that year. The hill was then renamed Maple Hill. The logic of this is inescapable.

– The young man running towards the camera from the end of the platform might be anxious, but he’s the only one who is. Look at the rest of them: calm, friendly, involved. There are a few white dresses, though. And at the far end of the platform, there’s a man standing alone, waving, and wearing a white or a pearl gray top hat and waistcoat. Is this the tag end of a wedding party? Is he seeing the bride and groom off on the train? Is he sad, or is he relieved? And why is the young man running?

– When you’re a little fellow your mother will awaken you Christmas Eve and whisper, “The carol singers are here,” and you crawl from under the blankets and watch them from the window. Here Dr. Seitz is . . . playing the glockenspiel. The cold air, he found, made the glockenspiel go sharp, so 1938 marked its debut, and 1939 its finale. We suspect that Dr. Seitz was saddened, but philosophical. The important thing was being a Caroler.
– The young man in the mural is not Terry McFatridge. We know this for two reasons. First, Terry told us it wasn’t. Second, we happen to know that he took the smaller framed picture of the same scene and it was a century later. That clinched it.

– Willis Rohrbaugh was not a big fan of Agnes, either as a Hurricane or as a Tropical Storm — it’s been called both, plus other things. What Mr. Rohrbaugh called it we don’t know. We do know that, in addition to floating pianos and putting mud in the Library, Agnes also put the railroad out of business.

– This was Neuhaus’es in 1910. Now the Arthur Hufnagel Public Library of Glen Rock, you are at the moment standing on its floor. But the structure the Neuhaus’es built to hold the business and Oliver Plows and seed and paint and on and on, now revised a bit, holds the Library and, incidentally, you.