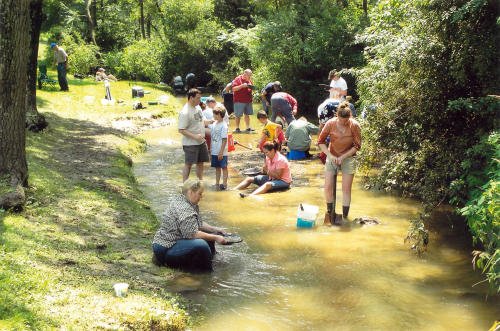 Gold panning is pretty common around York County in the summer. So is dredging for gold. Here is a group at work in Spring Valley County Park during a York County Parks seminar held each July. But don’t expect to get rich. (To see the results of one such adventure, check out photograph below.) Also of interest: Pan-demic, rather dredge-demic, gold fever strikes York County and There’s oil in those York New Salem hills and Pandemic struck York County in 1849 – gold fever.

It showed how to distinguish a raven in York County’s skies v. a crow. (Crows give a caw sound, and Ravens manage more of a croak.)

It brought forth the tale of real 49ers from York County who went to California’s field in search of fortune. (Dr. Henry L. Smyser, one of the adventurers, wrote, “We had a full view of the elephant.” He meant that the party had taken in the full picture of prospecting.)

But the real discovery voiced by some is that there’s gold in York County streams. You won’t get rich, but it’s there and ready for panning. (“What we do around here is recreational panning,” Jeri Jones from York County Parks said, “It’s not for money.”)

To all this, York’s Roy Flinchbaugh, a regular correspondent, indicated that one detail in this fun comparison between the 49ers and the Ravens is missing.

“I didn’t see any mention in the 49’ers piece about General Sutter having moved in his later life to Lititz PA where he died & is buried. I know that’s not York Co., but it’s a lot closer than California. You probably knew this already & have probably dined at the General Sutter Inn in Lititz. Excuse me for purveying the obvious.” 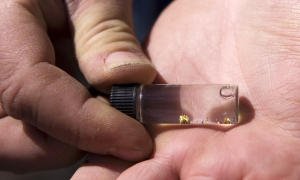 Flakes of gold panned from a different creek from the expedition above. These came from the Conewago Creek.