44 milestones and facts from Todd Platt’s past 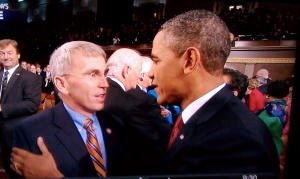 President Barack Obama stops to greet Todd Platts at a State of Union Address. Scott Fisher wrote about Platts’ customary aisle seat at the annual address. Also of interest: ‘Drew media attention for his practice of staking out an aisle seat during the state of the union so he could shake the president’s hand and get his autograph,’ Scott Fisher of York Daily Record/Sunday News wrote in an authoritative profile on the retired congressman. Also of interest: 10 stories capture the lives and times of U.S. congressmen from York County, Pa.

A sidebar covered many Platts’ milestones, 44 of them.

My favorite. No. 21: “Was the subject of maybe the lamest roast in political history when roasters at a charity fundraiser could barely find anything negative to say about him.”

Here goes, with the caveat that even 44 milestones are only a fraction of the journey:

1. Elected to first term in state House of Representatives in the 196th District in 1992.

3. Refused to accept WAMs, walking around money, as well as per diems.

4. Pushed for House rules reforms that would empower rank-and-file lawmakers over the good old boy club of House leadership.

5. Was part of an unsuccessful attempt to wrest control of the York County Republican Party from longtime good-old-boy leader, John Thompson.

7. Supported a state assault weapons ban – a vote he would later repudiate in Congress.

8. Married to development director of local Planned Parenthood chapter, his position on abortion “evolved” from pro-choice to pro-life – with exceptions. Opposed partial-birth abortion.

9. Had a perfect legislative attendance record in 1996.

10. Opposed Spring Grove school board decision to ban Sunday sports activities on school property when members said they thought people should be in church – called that a violation of church/state separation.

12. Ran for York County commissioner in 1998 – lost in primary to Chris Reilly, who he would later defeat in a primary for Congress.

13. Voted against state lawmaker pay raise and refused to take the raise.

14. Proposed a bill requiring owners of low-head dams to place and maintain warning signs and buoys above and below the dangerous dams – signed into law in 1998.

16. Among the first to call for York Mayor Charlie Robertson to resign after the mayor was charged with homicide in the 1969 riot murder case.

19. Fought for residency status for 35 Chinese men who came to the U.S. illegally on the Golden Venture ship.

21. Was the subject of maybe the lamest roast in political history when roasters at a charity fundraiser could barely find anything negative to say about him.

25. Voted for No Child Left Behind.

28. Supported military operations in Iraq and Afghanistan – and visited both war zones many times.

30. Had a falling out with county Commissioner Steve Chronister over the controversial Lauxmont Farms project spearheaded by Platts’ brother, Mark.

31. Sen. John McCain visited for a Platts fundraiser – and Platts was an early endorser of McCain’s presidential campaign.

32. Accompanied President George W. Bush on a tour of the local Harley-Davidson Plant.

33. 2Supported earmark reform and pledged not to request earmarks for fiscal year 2009 until the process was made more transparent.

35. Drew media attention for his practice of staking out an aisle seat during the state of the union so he could shake the president’s hand and get his autograph. Take a satirical look at Platts’ other historic ‘photo bombs.’

36. Twice beat Democratic York College professor Phil Avillo for re-election. Avillo was arguably the only formidable challenger he faced over 12 years in the U.S. House.

40. Became chairman of the House Subcommittee on Government Organization, Efficiency and Financial Management.

44. Followed his own 12-year term-limit proposal and announced he would not seek re-election in 2012, with no post-congressional job – lobbyist or otherwise – lined up.