This unexpected thing was fished from a York County, Pa., creek in a cleanup

Linked in/Neat stuff: A day in New Oxford/Where is Weco? 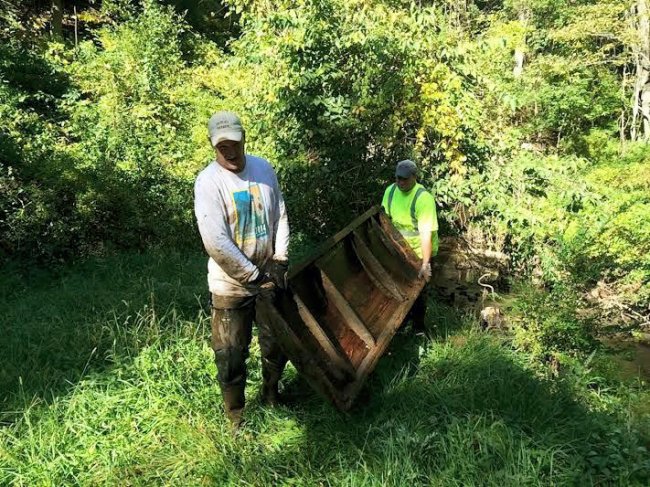 Some were surprised with what was fished out of Lightner’s Creek in Manchester Township recently. That creek produced a casket lid in a recent cleanup. York has been home to a casketmaker for decades – York Casket. In fact, before and after York Casket formed in 1932, funeral homes made caskets in many small towns around York County. Or rather furniture makers operated funeral homes. Or both. No telling the source of the Lightner Creek casket lid or how it ended up in the creek. But casketmaking has been part of York County’s woodworking landscapes for centuries. Also of interest: When York County undertakers served as woodworkers … and vice versa.

The York Daily Record’s Hannah Sawyer explained in a recent story that it grows from a market campaign operating on the theory: “If you name it, they will come.”

She wrote: “Sonia Huntzinger, executive director of Downtown Inc, said that’s the theory behind York’s recent push to brand pockets of its 26-block downtown business district, creating a patchwork of neighborhoods that will each offer something different to regional visitors.”

So now you know when you hear references about the Beaver Street District and such. By the way, Weco stands for west of the Codorus Creek, an improvement over its original name – Bottstown.

Here’s the story that Jay mentioned.
+++
More on Camp Security:

Provocative headline above a YDR.com story on the quest to find the site of the American Revolution’s POW camp – Camp Security:  Camp Security: Where exactly is it, and will archaeologists find it?

+++
Love these ‘day in the life of’ features

History mystery: Join in the quest to ID this old place: