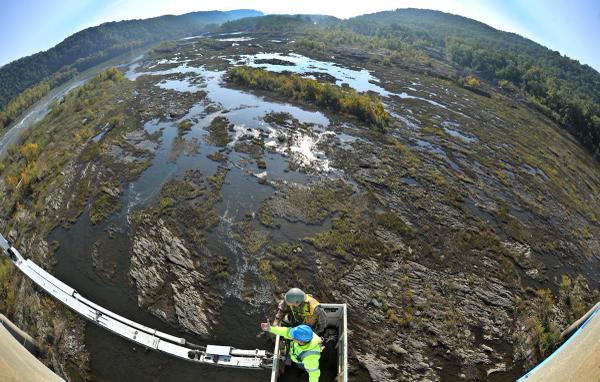 The York, Pa., Daily Record’s Jason Plotkin’s photos from above the Norman Wood Bridge are telling for several reasons. With a Susquehanna River bed like that, it’s obvious why the river over the centuries could not be navigated – or at least navigated by flatboats only in certain rainy seasons. It’s also why canals had to be put in on both sides of the river so that farmers and merchants could get their goods to market on the Chesapeake Bay. From above, other perspectives about the one-mile-wide river come to mind. It’s indeed wide, and formed a barrier that help define York County, Pa., giving much of it a north/south orientation for long periods of its history. It was always hard to get across the river – and the crack in the Norman Wood Bridge that is causing wide detours north and south underscores that hasn’t changed. Also of interest: The Norman Wood Bridge at sunrise. 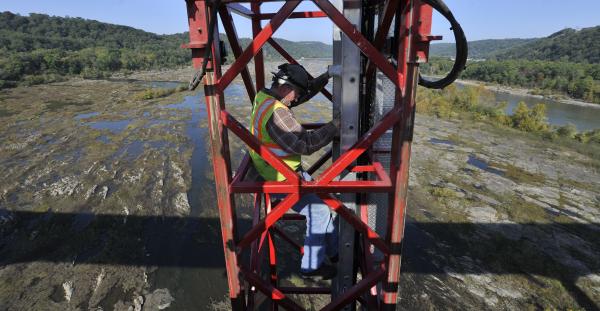 But there was a lot you could do on the Susquehanna. Just north of this southeastern York County, Pa., bridge, the Holtwood Dam crosses the river. Just south, the Peach Bottom nuclear power plant sits along the Susquehanna. For years, man has found the Susquehanna to be useful for power generation, as a place to dump untreated and treated sewage, outdoor fun and a host of other things. It’s been useful and versatile as well as beautiful. Also: Who was Norman Wood?

He wrote this as a letter to the editor under the headline ‘A week of fascination in YORK’:

This coming week heralds many high water marks for our town. We have much to laud, and exhilarating people connecting dots to make things brighter and visible. The slate includes –

Hotel Yorktowne celebrates 90 years of being York’s premier hostelry. This “modern hotel” of the Roaring ‘20s brought York into a new sphere of welcoming guests. And it has hosted many prominent celebrities. But the real star of the Desk is its Manager, Rick Cunningham. Under Rick’s watch, it has seen highs and lows, and with some aspects of its present murky in viewport, it likely will rebloom to a supreme White Rose icon as it enters its next decade. Kudos Rick and staff of Yorktowne Hotel!

Zion United Church of Christ commemorates its location from where Royal Square is taking what we knew as Woolworth’s – and in 1914 branched out at Kurtz Addition near Penn Common, building a magnificent edifice as a tribute to God and its longstanding heritage – being the second oldest church in York proper. Congratulations! Special program occurs Sunday October 18th.

And no lesser a feat –, First St. John’s Evangelical Lutheran Church, 140 West King St also holds a milestone and a distinction. Parting from the mother church Christ Lutheran in the 1800’s, it strived to retain German roots which were York’s origin. At the 140th Anniversary of its facility, it still conducts special services in German, keeping its basis intact. And – it was the first commission of young York architect John Augustus Dempwolf – being dedicated October 1875. Special program Sunday afternoon October 18th also cherishes this major milestone.

On the cusp of York’s 275th Founding date next year – we as citizens have much to embrace.

Honoring Cameron Mitchell: Fundraising is continuing to fund a scholarship in the name of the movie star who grew up in York County. The Mitchell movie ‘All Mine to Give’ will be shown at 7 p.m., at Bethlehem Steltz Reformed Church, 5890 Steltz Road, Glen Rock, Pa. Phone: 717-235-1523.

History Mystery: Can you name this place?

History Mystery: That grassy area beyond the stone bank of the Codorus Bank up to – and around – the Keystone Color…