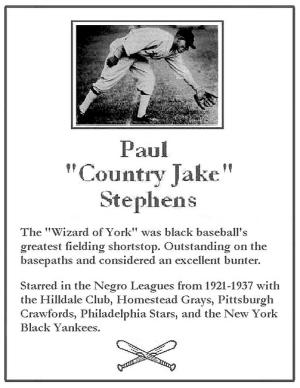 Paul Stephens was a respected Negro League shortstop. A sports fan wants to recognize Stephens’ Pleasureville burial site with a brass marker. This is a design of what the marker could look like at ‘Country Jake’ Stephens’ grave. For details about how to donate for the marker, contact organizer Ira ‘Ike’ Wolins at ikeman23@juno.com. Also of interest: Remembering York/Adams major leaguers

Ira “Ike” Wolins is seeking a plaque to mark the grave of Paul Stephens, who is buried in his hometown of Pleasureville in Springettsbury Township.

A York Daily Record/Sunday News story quoted a baseball historian who compared him to Mark Belanger, widely respected and feted, but better known for his fielding than his hitting.

That’s one story in the past week.

Efforts are persisting to restore a headstone for a Confederate soldier along the Susquehanna River in Hellam Township.

The longstanding stone, possibly for a member of Gen. John B. Gordon’s troops in their assault of the Columbia-Wrightsville Bridge in 1863, was washed away by flooding last year.

Think about these stories involving the efforts of well-meaning people – and feel free to draw your own conclusions in commenting below.

One story tells about a local resident who played in a segregated professional baseball league.

The other observes an unknown soldier who fought for a cause that created or backed this segregation, in the first place. That soldier might have been a scout or a spy, whose information could have led to the death of Union soldiers or private citizens.

In the case of the unknown Confederate soldier, let him rest in peace – unmarked. That way, memories of his cause will quite rightly fade away. 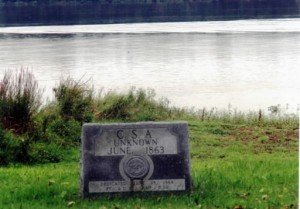 This granite marker stood on the banks for the Susquehanna River for years. 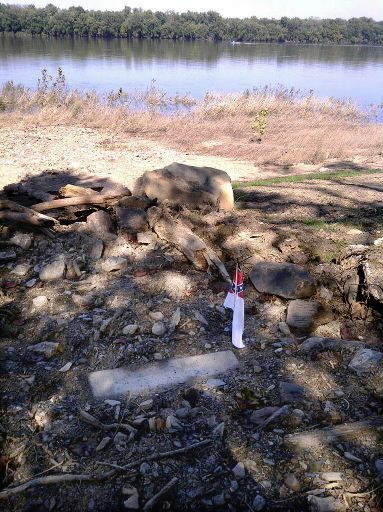