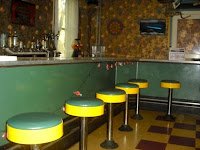 The Shady Dell’s snack bar area – in fact, all of the Shady Dell – has been renovated. The former south side York, Pa., teen hangout is now up for sale for those seeking a piece of York County’s past. This is the ‘before’ photograph. To get a sense about how that room appears now, see photograph below, as well as an exterior view of this Spring Garden Township spot. Also of interest: Memories mounting about old York-area teen hangout Shady Dell.

Tom Anderson, aka The Shady Dell Knight, has done an admirable job keeping the world abreast of the transformation of the old teen hangout into a mansion.

He’s done that by diligently updating his Shady Dell Music & Memories blog with photographs and information.

The main thing is that The Dell, on the hill in Violet Hill, will remain standing for “a while” now that it’s spruced under the supervision of owner Toni Deroche.

And here are a few tidbits Tom put up about The Dell, which closed in the early 1990s,  in a recent post:

– The Dell might be older than originally believed. Indeed, it is coming up on the century mark.

– One wall hanging is a collage of newspaper articles and photographs of the hangout over the years.

– A caption for a photograph showing a  place to hang your hat, right beside a door,  states: “The new Dell is a place where you can also hang your  Baracuta and your Jack Purcells, two essentials of the  official Dell rat uniform. ”

– The house is on the market and date of an open house this spring will be listed on Tom’s website. Meanwhile, questions can be directed to: tonideroche1@yahoo.com. 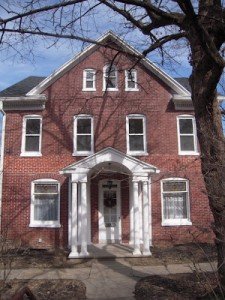 The front of the renovated Dell. 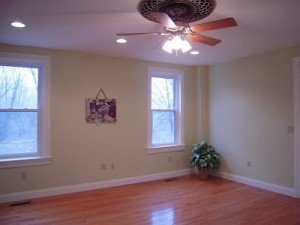 The snack bar room today. (Compare with photograph above.)

Additional posts on the Shady Dell or White Oak Park (The Dell’s northside counterpart):
Shady Del Knight unmasked: Rat pack leader keeps alive memories of old south York, Pa., teen hangout
–Just try to resist this memory-tugging photo of White Oak Park.
–Stadium will be site of The Oaks music reunion
–Wanted: Old photos of teen hangout.
–Memorabilia from ‘the Oaks’ hard to come by.
–Memories of The Oaks pile up.
–Memories of The Oaks pile up – Part II.
–The Dell: ‘It was like family’.
–White Oak Park welcomed Blaw-Knox workers .
– Shady Dell was home away from home for many York County teens in ’60s.

Archives:
– Of course, you can always search for Shady Dell-related posts on this blog by typing Shady Dell in the search box in the upper right part of the home page.