The real Elvis sighted in York County in 1956 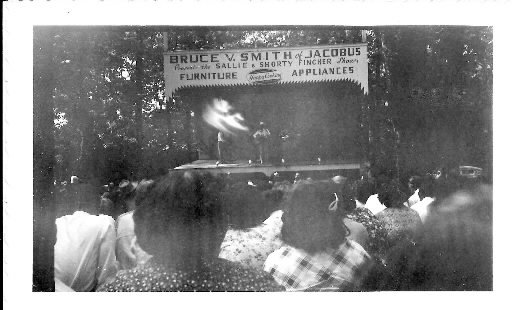 This isn’t Elvis but this is the stage that he performed on in 1956. Indeed, Hellam Township’s Valley View Park played host to many national celebrities over the years – including Roy Rogers with Trigger, The Three Stooges and local celeb Shorty Fincher. Also of interest: Country music’s Shorty Fincher: ‘Valley View is the best of the lot’ .

Valley View Park near Yorkana was the storied venue for the likes of Roy Acuff, Hank Williams Sr. and Tex Ritter to perform some years ago.
The eastern York County concert location, now covered with housing, is highlighted in a small exhibit at the York County Heritage Trust, 250 E. Market St.
Roy Rogers is one of the performers displayed in the exhibit.
But the most famous performer to grace the stage there was Elvis Presley, who had just performed on “The Ed Sullivan Show” in 1956… .

He added the “Elvis Pelvis” to his routine, something TV viewers missed on the censored Sullivan show.
“The more he shook, the more they screamed,” Betty M. Scott told the York Daily Record in 1998.

Country and western singers appeared regularly at the park, which only held about 150 people. It was set in the woods between Hellam Township and Yorkana and has since been turned into a housing development.

Scott’s father wanted to surprise her so she was told she would be seeing country music’s Grandma and Grandpa Jones. When someone announced Presley’s arrival, the Scott family moved closer to the stage, sitting on boards nailed to tree stumps.

Presley was hot off the heels of his first appearance on “The Ed Sullivan Show,” which is where Scott first saw him.

The would-be King of Rock’n’Roll performed two sets at Valley View, and “the more he shook, the more they screamed,” Scott said. This was the first time they had seen Elvis move his hips because TV censored the famous “Elvis pelvis.”

During intermission, Scott met Presley. He kissed her and shook her hand. She swooned.

In the second half of the show, Presley sang “Blue Suede Shoes,” the song Scott had requested during intermission. Then he pointed to her in the audience.

A resident of Chanceford Township, Scott again met Elvis at Fort Meade, Md., before he went off to Germany to serve in the U.S. Army.

During that meeting, Scott and her cousin, Kay Chestgreen ate lunch with the by-then superstar, who introduced them to his culinary favorite – the peanut butter and banana sandwich.

“I still can’t talk about it,” she said, breaking down. “I was screaming and crying all night.”

Many people remember hearing of Elvis Presley’s death 20 the same way they recall where they were when they heard of President Kennedy’s assassination.

“I can remember when Elvis died and when President Kennedy died,” said Darlene Smith of York Township. She was on vacation at Disney World when she heard the news of Presley’s death. Smith wasn’t a huge fan. “I think we knew we would always remember,” she said of herself and her family.

Presley died Aug. 16 – 20 years ago – at the age of 42 at Graceland, his estate in Memphis, Tenn. Thousands of fans are expected to mourn his death in a candlelight vigil that begins with a ceremony at 9 p.m. tonight.

The fans will file past his grave in a procession that will go on all night.

One of those in attendance will be Joyce Rosenzweig of Codorus Township, who booked the trip a year ago. She also visited Graceland on the 15th anniversary of Presley’s death.

“People come from all over the world,” Rosenzweig said. “Flowers line the driveway.”

While standing in line waiting to reach his gravesite, the only sound is that of Presley’s music playing in the trees.

Rosenzweig, 51, is a huge fan who has amassed a large collection of Elvis memorabilia, including a pair of his pajamas. She was at home when she heard of the King’s death in a television news bulletin.

“I just couldn’t believe it. I was devastated. I’ve been a fan since I was 12 years old,” Rosenzweig said. “I think he’s the most gorgeous man put on earth. And he’s a religious man, and he always loved his mother.”

Joan Lynch of York also was “devastated” when she heard of Presley’s death. The 54-year-old woman knew him.

Their relationship was limited to numerous telephone conversations, which might seem strange to some people. But it did involve Presley, who was something of an anomaly. Lynch met him over the phone at a friend’s house in 1971, and for the next several years, until his death, he called her regularly.

“He seemed to confide in me,” Lynch said. Lynch was married with two children living in Southern California at the time. Presley called her from hotels and from Graceland. He wanted her to come see him, but she wasn’t going to jeopardize her marriage. She was raised without a father and vowed never to let that happen to her children, she said.

Presley was a lonely man, Lynch said. He told her the only things he knew were hotel rooms and the back seats of limousines.

He suffered from a variety of ailments toward the end, Lynch said. According to reports, he had glaucoma, colon problems and a heart condition. His death was mainly attributed to a massive heart attack.

Lynch is very protective of Presley. “He wasn’t a saint,” she said, “but he wasn’t the evil type the way “they’ portray him.”

She asked him why he called her when so many women wanted to know him. He told her he liked her honesty. And the phone was the only way he could get to know someone.

“I think he could sense that I wasn’t out to get anything,” she said.

Certainly, many demands were made on Presley. He had a staff that was dependent on his success.

Since his death, his popularity has increased. Fans flock to Graceland all year round. The tourist attraction makes $15 million annually in admission and souvenir sales.

James F. Smith, professor of English and American Studies at Penn State Abington, explains the Elvis phenomenon this way: “Regardless of what your personal taste or opinion about rock’n’roll or Elvis Presley may have been, there is no question that Elvis in the mid-’50s was a primary change agent for the course of American popular music … It recharted the course of popular music.” 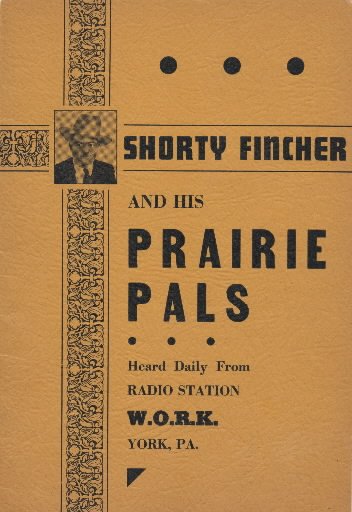 An area resident, Paul Swemley, shared this publication about Shorty Fincher. Fincher’s music was played on WORK radio, and he sang at Valley View Park. Also of interest: Is that Elvis in the York Fair mural?