The pride of being an American is written on his face: Linked in with neat York County history stuff, Dec. 10, 2011 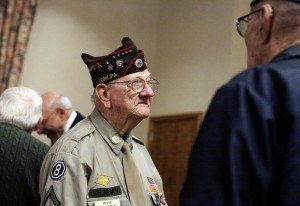 Billie Houseman of York is a veteran of the Battle of the Bulge in World War II’s European Theater. The York countian, proudly in uniform, attended a York Expo Center commemoration this week marking the 70th anniversary of Pearl Harbor.  Local veterans joined counterparts elsewhere in America in observing the seven-decade anniversary of the Dec. 7, 1941, attack on Pearl Harbor. One national group, the Pearl Harbors Survivors Association, used the occasion to say it was disbanding. ‘It was time,’ William Muehleib said. Also of interest: 20 questions and answers to prove your York County WWII smarts.

John Stine is a student of York County history and a mainstay behind the Police Heritage Museum. (You must check out the museum’s very interesting site.)

He noted a recent post on this blog about the prevalence of outhouses in York City a mere 40 years ago.

“I’m sure many of your readers don’t realize the small narrow alleys to the rear of homes in the city, were not just grass pathway to access the rear of homes, but were used by those who would empty the contents of the outhouse or privy (as they were sometimes called).

“The people you would contact to empty your outhouse of the deposited contents, were called ‘Honey Dippers,’ and these small alleyways were referred to as honey dipper alleys.

“The Honey Dippers would bring a wagon down these alleys, and clean up your mess! (don’t think I have ever seen a photo of one of these wagons)

“I have found a painting that is signed Rudy 1935 and on the back it is written Charles Rudy…..ville Pa.

“It is a painting of a large tall ship with all sails open…..on a blue ocean with blue sky.  I know he isn’t known for his paintings …,” she wrote.

Any readers who can enlighten Linda are urged to contact her. The answer might be in the Rudy file at the York County Heritage Trust Archives.

One more booksigning: Scott Mingus and I will sign copies of our new book “Civil War Voices from York County, Pa.” at Irvin’s Books on Dec. 22. The signing is set from 6 p.m. to 8 p.m., at the 2159 White Street bookstore.

Blog post of the day: Buffy’s World brings together neat links from all over: Case of missing cemetery statue to writing contest to Pearl Harbor memories.

Forum of the day: Exchangers are discussing:  York’s famous music groups and bands.