The more things change in York newspapering, the more they stay the same. Linked in with neat history stuff, Feb. 24, 2012 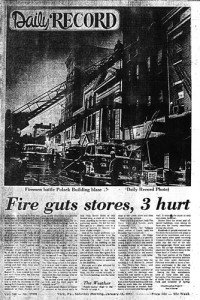 York, Pa., Daily Record/Sunday News Sports Editor Chris Otto flagged this front page from Jan. 15, 1972, showing a major East Market Street, York, fire. The large use of photographs resembles those used in recent years at the newspaper for major stories – 911 and Joe Paterno’s death. Otto commented that things don’t change in the newspaper business, they just, well, recycle. (See another example involving advertisements below. Click to enlarge this photograph.) That might be true on the print side, but newsrooms are going through a digital revolution. The story with this photograph noted that flames destroyed the Polack building at 27 E. Market St. and was the largest in York, except for those from the race riots, since 1959 when Miller’s auto supply in the 600 block of East Market St. was destroyed. Also of interest: Rex/Laurel, one of four York, Pa., operating fire stations, built a dozen years after Civil War and Photograph of York’s worst, bad fire.

Neat stuff from all over:  Peggy Brenton, pabrenton@hotmail.com, hit paydirt in gaining responses about her family history after a York Town Square post that also appeared in the York Daily Record/Sunday News.

And she’s looking for more.

She wrote:
“Jim, I am thrilled to death. I got an email and have been communicating with a man with background on the Neff family. He said he saw the inquiry in the York paper. Your efforts have given me a great big Valentine special surprise… .  He took our lines back to 1598.

“Wow, I am ever sooo gratetful. Maybe I will get lucky and get someone to find Solomon Emigs lines.”

Upcoming birthday: First Moravian Church in York is observing its 260 anniversary. Church member Terry Downs has put up a 260th Facebook page to document the vent.

The reel stuff: The American Experience on PBS is featuring the Amish, and the York County Heritage Trust provided reel-to-reel film footage for that project. For details on the series, visit: The Amish.

Blog post of the day, I: Buffy’s World presents, best of blogs this week.

Blog post of the day, II: Cannonball’s Scott Mingus writes about the latest in the series of Civil War books by Jim Moss, Sr., who documented the writing of Civil War soldiers who were acting as correspondents for the “Church Advocate.”

Forum of the day: Jimmy Bear over at The Exchange has a thread going: Products made or once made in York. 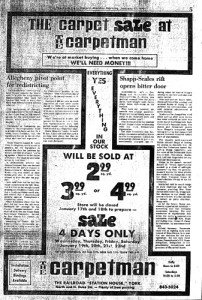 The Carpetman was then located in the Railroad Station House in York and North and North Duke Streets. As is becoming more common today, newspaper advertisers in 1972 used non-traditional ad stacking. Traditionally, advertisements are stacked in a bunch on the left or right of a newspaper page.