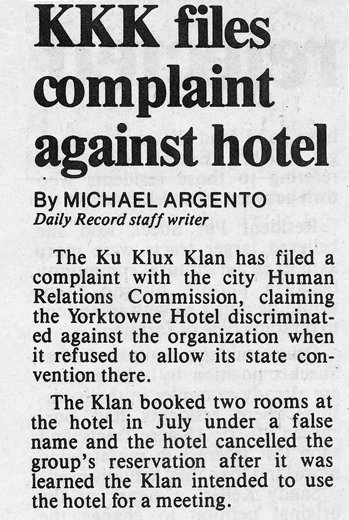 This clip from the York, Pa., Daily Record tells about an ill-fated attempt by the Ku Klux Klan to meet at the Yorktowne Hotel in 1987.  Also of interest: Finder of KKK certificate: ‘My first thought was fear … the Ku Klux Klan would have loved us’

So I was leafing through a York City Human Relations file to prepare for a presentation at the 30th annual Frederick D. Holliday Celebration this week.

And I ran across a pair of newspaper clips about a day when the Klan sought to book two rooms at the Yorktowne Hotel.

Here’s that story, as related in the newspaper:

The Klan planned to hold its state convention at the downtown York hotel on July 19, 1987. It booked the rooms under a false name – “Python’s Den.”

The  name must have piqued the curiosity of hotel staff. They checked it out, discovered the group behind the name  and canceled the reservation, citing public safety concerns.

The hotel allowed an all-black group to use the hotel, the Klan argued, so it must rent to an all-white group, like itself.

The Human Relations Commission saw through the claims. Courts had ruled the Klan is not a religious organization, and the alleged all-black group – the NAACP – had white members. In fact, when the NAACP met at the Yorktowne, a number of the participants were white.

The Klan also claimed it was a peaceful organization, but the Human Relations Commission’s research, of course, proved otherwise.

“Considering the (Klan’s) known reputation, the (hotel) did in fact have a legal right, and a legal duty, to keep them out,” Human Relations Commissions director Marakay Rogers said in discussing why the agency dismissed the KKK’s complaint.

There’s an irony to all of this.

For years after its founding in 1925, people of color were not permitted to lodge at the Yorktowne, although the hotel employed many blacks in visible service positions.

But across the street, the Lafayette Club was a good decade away from accepting its first black member.

The Human Relations Commission would have been on the horns of a dilemma if the KKK had sought rooms at the Lafayette Club.

And been turned down. 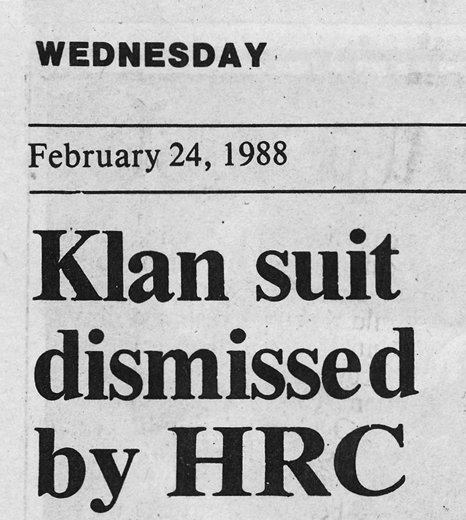