At York County’s blind center: ‘The bees have been enjoying this garden, too.’ 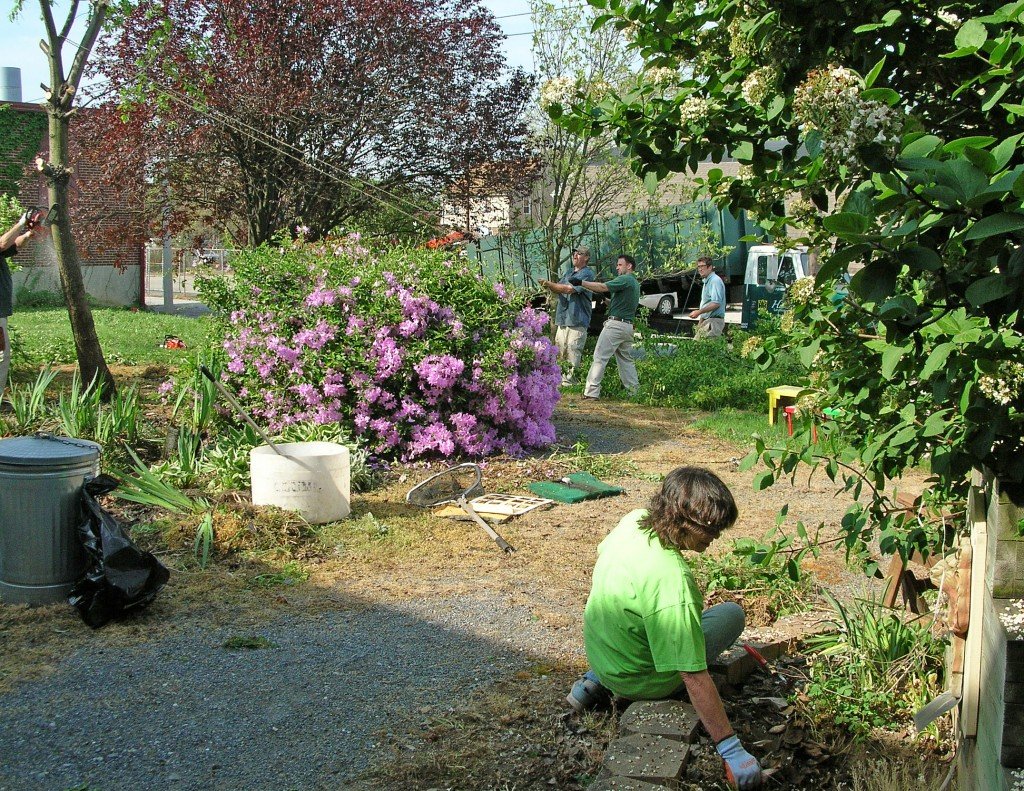 This garden, planted in the 1990s, adds to ForSight Vision’s Spahn Avenue campus. “All I was thinking of was a few tomato plants,” the center’s president, Bill Rhinesmith, joked at the garden’s dedication.(See below for details.) Interesting information on the center’s first 75 years has been collected into a booklet written by Luther Sowers and available at no cost at Forsight Vision, 1380 Spahn Ave., York, 845-3889, www.forsight.org. Background post: York County lawmaker fought to aid the blind.

Did you know?
– That the charter for ForSight Vision, formerly the York County Blind Center, was approved by Judge Ray P. Sherwood, who was blind in his later years?
– In a typical year – 1952 – workers at the blind center made 568 brooms and repaired 391 chairs.
– In 1967 – way early in the computer age – a blind worker in the center’s workshop temporarily left to take a course in computer programming.
– The center started radio broadcasts in 1976 via a sub-channel of WGCB-FM. The center handed out special receivers, and volunteers read the local newspaper and books… .

Luther B. Sowers’ “ForSight Vision, 75th Anniversary” booklet contains these and many other interesting “insights” about this effective and useful York County organization in its 30 pages.
It also contains photos and brief information on an intriguing part of the center’s Spahn Avenue complex, the “Garden of the Senses.”
Here’s more on the garden, as found in a York Daily Record story in 1995:

In tossing a bit of dirt from a shovel Friday, state Rep. Todd Platts, R-Spring Garden Township, officially opened the York County Blind Center’s “Garden of the Senses.”
For nearly two years, volunteers worked to transform the lawn in front of the center’s 1380 Spahn Ave. location into a blossoming wonderland.
“All I was thinking of was a few tomato plants,” the center’s president, Bill Rhinesmith, joked at the dedication ceremony.
With their blooming flowers and fluttering butterflies, gardens always delight the eyes.
But what do they offer the sightless?
I shut my eyes, and landscape architect Dan Wise guided me around the garden. He worked along with other Penn State Master Gardeners on this 21-month project.
Asphalt stones immediately crunched beneath me as we entered the garden. A soft breeze swept my cheeks and I heard a faint tune.
“We have wind chimes in the gazebo,” Wise explained.
The wooden gazebo felt smooth, just a hint of weather-beaten roughness hit my hands as I ran them across the bench.
We continued our stroll.
“Many people here are not totally blind,” Wise said. “Many are visually impaired, but can still make out shapes and colors, which is why we have a variety of brightly colored flowers and leaves here.”
My toe sank into something soft. It’s mulch, Wise told me.
“We used different textures to break things up, to give a different sensory perception at different junctions,” he said. “There’s the cement, then the mulch, then the grass.”
I heard the low rumble of trucks and cars on Hill Street. Then an orchestra of crickets sounded.
“They just found us, I guess,” Wise said, laughing a bit.
We walked farther and Wise described the flowering plants in the garden. I heard water splashing over stones.
“The pond had to be re-done,” said Tom Becker, a Penn State horticulture extension agent. “When we first did it, it was leaking … .”
There seemed to be movement in the water. Wise told me there are several goldfish in the pond.
I knelt down and felt the fuzzy leaves of Lamb’s Ear plants beside the pond.
“We consulted with many other master gardeners and asked about plants with textures,” Wise said.
The aroma from the herb garden fought the smell of fresh cookies from the Stauffer’s plant. Sitting on the stone wall where the herbs are planted, I leaned over to better take in their fragrance.
“Be careful,” Wise warned. “The bees have been enjoying this garden, too.”
I heard a low hum by my ear and jerked back.
“There’s a ramp on the side of the building where employees of the center can come directly into the garden,” Wise continued.
I soon heard the wind chimes again.
“We’re back where we started,” he said cheerfully.
I thanked him for his indulgence and sought Becker.
The vision of this project started with a Boy Scout Troop looking to do a good deed. It flourished into this tranquil spot.
Dozens of people around the county assisted in bringing this garden to life, donating time, plants and a host of other supplies.
“Obviously the idea of a sensory garden for the vision-impaired is not original,” Becker said. “But this one is being associated with an agency that has 100 people working here.
“They can directly benefit from it every day.”
As can the rest of York County.

Also of interest:
– For an additional link on the history of the blind in York County, see: Essayist profiles champion for the blind.

– The York County Blind Center fielded a bowling team that competed in tournaments in Philadelphia, Pittsburgh and Harrisburg.