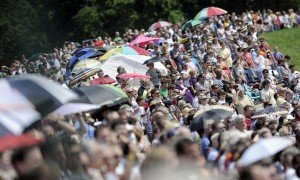 This was the scene at the Annual Gettysburg Civil War Battle Reeactment Saturday. Spectators put up umbrellas against the sun and glued their eyes on the action on the field: ‘Ambush at Hunterstown.’ To see an example of what they were watching, check out Gettysburg battle re-enactment photos. The reenactment continues today. Later in the day, four journalists from three southcentral news organization lived tweeted the reenacted fighting around Devil’s Den. Also of interest: Check out these Civil War-related photos and stories on yorktownsquare.com.

They – we – live tweeted a battle that was part of the annual Civil War reenactment at a farm north of Gettysburg.

The 4 Tweeters – Marc Charisse, Matt Major, Pat Abdalla and I – are journalists at sister news organizations. Those are the tweeters, and here are their twitter handles: @ESMCharisse, @MattMajorPO, @ydrSouthpaw, and @JamesMcClure using the hash tag #gettysburg. (Abdalla was the only left handed tweeter in this bunch, not that made any difference.)

All this might be akin to understanding someone describe physics with a thick Southern draw, but users of social media’s Twitter will understand it. They understand that Twitter is one of the most difficult forms of social media to deploy because your information is capped at 140 characters. But then, Civil War reporters, using the newly developing telegraph, hardly used flowery descriptions in delivering their clipped reports from battlefields via overworked telegraph operators.

So you must be brief, as evidenced by this sampling of my tweets:

I started with this from York County, a few miles west of the York County Airport: ‘Just passed Farmers on way to G’burg. Rebels marched from here to Susquehanna in 1 hot day.’

And this came near the end, from the battlefield: “Organizer said they really want audience to have a good experience. They seemed to.”

And here are a few in between:

– “#reenact heat delay is bit like rain delay in baseball. Lot of sitting around. Here’s a quiz: how did Devil’s Den get its name?”

– “Wonder if 2 tweeters getting batteries recharged is roughly equal to soldiers getting canteens refilled?”

“Announcer says folklore has it that large snake lived among rocks which had a cave within.”

– “Rifled cannon technological advancement CW. Rifling was to artillery what twitter is to telegraph?”

– “Interesting, a gray soldier shot by blue cavalry. Ambulance nearby. In realty, wounded suffered under sun for hours.”

– “#reenact ends with singing of God Bless America. Some going to a religious service.”

To see all that the 4 Tweeters put forth, check out this archive: See how it all unfolded live during the assault on Devil’s Rock

– And see the Philadelphia Inquirer story on the 4 tweeters at work: At Gettysburg, tweeting the news and battle data 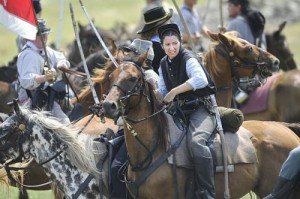 The cavalry battle at Hunterstown, reenacted here on Saturday, took place only a few miles from York County’s border. Is that a female trooper reenacting in this ydr.com photograph? Check out a bunch of more photos and a video of the event.