Thanksgiving Day application to York, Pa. and the world: Good can come from bad 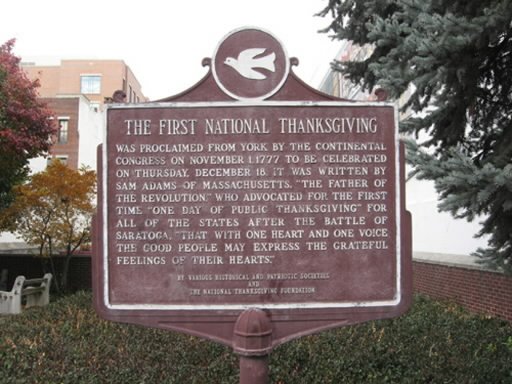 This obscure marker sitting a bit back from East Market Street in York, Pa., describes the city’s connection to Thanksgiving, or at least the first day of Thanksgiving and Praise in the American Revolution. York’s linkup with the holiday is one of York County’s great controversies. Also of interest: Did York’s Thanksgiving proclamation indeed create America’s first Thanksgiving?

Another in a series of holiday posts, written for yorktownsquare.com and the York Daily Record/Sunday News:

It was a news story that never developed.

Last weekend, Sandy-inspired spot gasoline shortages occurred at certain Sheetz convenience stores. Word got around that some pumps were closed, and some motorists rolled to convenience stores to top off their tanks.

Nothing wrong with that, in itself. But more about that in a minute.

She spent her fury along the New Jersey/New York coast. Gas shortages of the real kind are evident there. People are living in temporary housing, as insurance works out their deals. That is, if they had insurance. And even if the floodwaters spared immediate property destruction, mold and mildew threaten.

But here’s something to contemplate this Thanksgiving Day: Good can come from bad – thankfulness from thankless circumstances.

York countians are collecting bags and boxes of goods to ship east. Hairdressers are giving part of their proceeds to flood victims.

The U.S. is opening its hands to the Jersey shore.

The fact is that thankfulness does not come easily for Americans. Both peacetime (when things are going well) and wartime (when forces like Sandy strike) present challenges.

In peacetime, we can become complacent, take things for granted, take our faith lightly. We tend to think of ourselves, absorbed in our laptops, videogames and favorite sports teams.

As Sandy demonstrated, we can move from relative peace to chaos in a matter of hours.

In his book “Don’t Waste Your Life,” John Piper cites the luxury liner Queen Mary as an example of how our possessions and peacetime circumstances can take over and become our treasure:

The ship, permanently anchored in the harbor at Long Beach, Calif., was converted from oppulent cruises to troop transport in World War II.

So the floating museum shows a dining room equipped for luxury living, with knives and forks and spoons fit for wealthy patrons.

On the other side of a partition, wartime austerities are exhibited. There’s a metal tray with indentations and bunks eight tiers high.

The ship reminds us that we can move from peacetime to wartime in just hours, as long as it took for the Japanese to strike Pearl Harbor.

America’s Founders clearly understood the fine line between the bad and good moments.

Meeting in York in the fall of 1777, this bedraggled bunch witnessed their Continental Army lose battle after battle against Britain. Then came a win, in faraway Saratoga, N.Y., and the long-awaited return to York of news of that triumph over the British – the Battle of Saragota.

The moment the messenger rode into York, circumstances changed. Congress proclaimed a day of Thanksgiving and Praise, a day set aside to thank God for blessing America with this change of fortune.

So when word about that spot gasoline shortage circulated around York County last week, some recollections of the 1970s and the lines at the gasoline pumps came into play. Some scurried to the convenience store.

And here’s the question for those with filled tanks: If the shortage had been real, would they have shown their thankfulness for their fortune by shuttling friends and co-workers to their destinations?

Our circumstances can change so quickly, and we must express our thanks and gratefulness at all times, in peacetime and wartime.