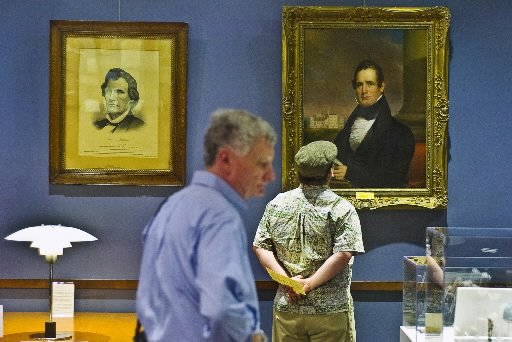 Thaddeus Stevens is becoming known to many through Steven Spielberg’s ‘Lincoln’ film. Former York City official Matt Jackson believes York countians should discover him too. ‘Old Thad’s stock is rising fast,’ he wrote in a York Sunday News column, ‘Thad Stevens, a great trailblazer.’ Stevens came to Pennsylvania – to York – as  a teacher in York County Academy in 1815. Here, patrons attend an exhibit exploring Stevens, born in 1792, and his accomplishments at Gettysburg College’s Musselman Library earlier this year. The exhibit is open until March 2013. Also of interest: New York Academy is just down the block from old York Academy.

Matt Jackson is right. Clearly, York County should, too.

Here’s a short profile emphasizing Stevens’ local connections from my “Never to Be Forgotten:”

“Thaddeus Stevens, a controversial figure in 19th-century America, is born in New England. After graduating from Dartmouth, his first stop is the York County Academy, where he teaches for a year starting in 1815 while studying law.

“He apparently forms enemies in York because he reportedly is rejected in a bid to join the Freemasons. Further, the county bar association passes a resolution forbidding anyone from taking the bar exam who is not studying law full-time. Stevens also worked around a residency requirement of two years by passing his bar exam in Bel Air, Md. He leaves York to practice law in Gettysburg, where he becomes a leading lawyer in Pennsylvania.

“Stevens’ accomplishments include his defense of public education as a member of the state Legislature and his abolitionist voice as a member of U.S. Congress. ‘To some he was the ‘Old Commoner’ or ‘Great Leveler,’ who fought for the poor, the oppressed, and the underprivileged; by others he was held in great contempt as a clubfooted, evil, vengeful politician who climbed to power by shrewdly supporting the issues that were popular with the lower class of voters of his day,’ a historian said.

“The York Gazette provides an example of the opposition Stevens endured. When Stevens is accused of fathering an infant by the daughter of a friend, The Gazette claims he used a friendship “for the base purpose of utterly destroying the fair name and happiness of his child, and viper-like, desolating the fireside at which he has been welcomed and warmed.”

York’s role in the adoption of the Articles of Confederation, America’s first framework of government, is set for 2 p.m. today at the Colonial Courthouse.

Check out: Articles of Confederation Day to feature awards, performances.

Elizabeth L. Stein explains the significance of the Articles of Confederation.

Federal board rules: Friends of the Stewartstown Railroad received some bad news in their preservation fight late last week.

Forum of the day: Join Exchangers in discussing the Cuban Missile Crisis.