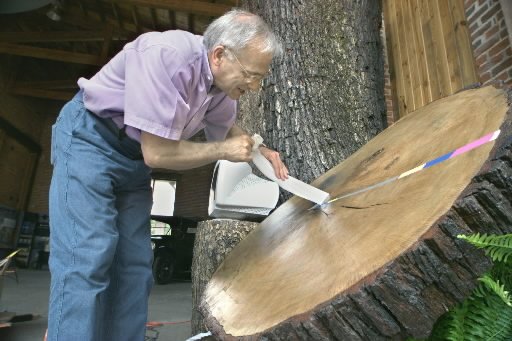 The York County Heritage Trust’s Lamar Matthew prepares the May’s Oak exhibit at the Agricultural and Industrial Museum in 1999. For photos of its replacement, see below.
The 300-year-old May’s Oak, a landmark in Emigsville, fell with a crash during a storm in 1997.
Portions of that mighty oak are part of a hands-on display, complete with a touch screen, at the Agricultural and Industrial Museum.
I discussed the display in a recent York Sunday News column, which covered all the hands-on opportunities for kids at the York museum.
And a newspaper story from 1999 tells about the tree at the time it was unveiled at the museum:

Droughts are nothing new for York County.
The proof is in the tree stump.
That’s right, a tree stump holds all of the answers.
The white oak tree, known as May’s Oak, shows the weather conditions that have plagued the county from the Colonial period to the early 1990s.
The section of the tree is approximately 300 years old and is displayed at the Industrial Museum in York.
The huge, circular stump, which has a 17-foot circumference, has thick black lines in it that indicate seasons when the county had plenty of water and thin tight lines that show the county’s dry spells.
The line for 1822 tells two stories: one of mass water and one of nothing at all.
In 1822, there had been both heavy snow and rainfall in the beginning of the year and severe dry conditions in the summer that caused crop failure.
Unlike many plants, trees can continue to live during dry conditions because their roots are so deep that they tap into groundwater, said Lamar Matthew , curator of collections for the York County Heritage Trust.
The dark spot in the tree shows where branches began to grow, but the tree grew over it, said Ray Davis, site manager for the Gates and Plow exhibit.
There is another spot in the tree that is believed to have absorbed a nail after someone stuck it into the tree around the Civil War period, Davis said.
The curator and museum workers were able to tell the age of the tree by counting the rings around the tree from the outer edge to the inner core.
May’s Oak tree has been on display inside of the Industrial Museum for about two months, but had been displayed outside of the museum since January 1997.
The York County Heritage Trust decided to make the tree stump into an interactive exhibit, with a touch-screen computer.
The display entitled “Deep Roots, Strong Growth” is sponsored by Drovers Bank and features 300 years’ worth of information from the “Never to be forgotten” book, by James McClure, managing editor of the York Daily Record.
A portion of the stump is color-coded to match the subject headings on the computer.
The tree was brought to the museum by one of its volunteers shortly after the oak blew down in a windstorm in 1997.
“I was always fascinated by it,” said Pete Adomis, about the tree located on North George Street in Emigsville. “I thought it was significant because people talked about it.”
Since the display opened two months ago, there have been lots of people coming in to see the exhibit, Matthew said.
“A lot of people have seen and had memories of the tree,” said Adomis. “They can trace their ancestors to the rings (in the tree) and bring people together.” 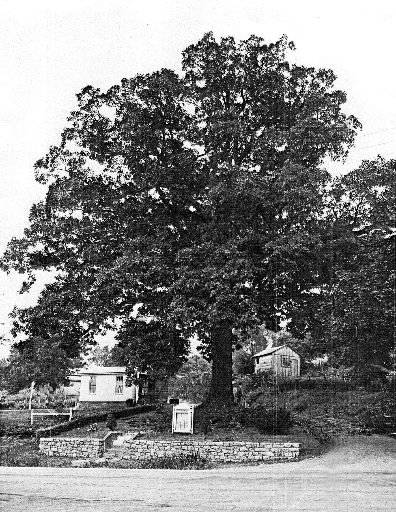 The Emigsville community planted a tree earlier in 2007 to replace the landmark oak, seen here, that crashed to the ground 10 years earlier.