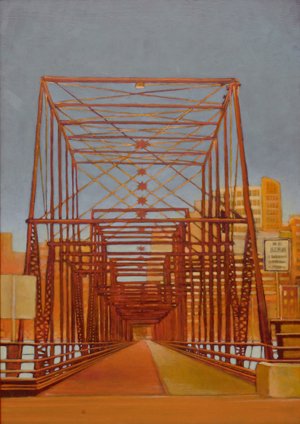 Part of the “Visions of the Susquehanna” collection of art could wind up in York County’s Long Level.
Curator Rob Evans and the Lancaster-York Heritage Region are seeking to place pieces from the traveling exhibit into a visitor’s education center, part of the Susquehanna Heritage Park… .

So fund-raising effforts are under way to raise a $50,000 match.
Interesting that this campaign is under way at the same time public and private officials are eyeballing a York Museum of Art.
If both campaigns are successful, maybe the two exhibitors could swap art pieces for special exhibits. Or perhaps the two could jointly raise funds.
Anyway, a York Daily Record/Sunday News story (6/2/08) details the plan:

Wrightsville artist Rob Evans and the Lancaster-York Heritage Region want to create a permanent collection of Susquehanna River art in York County.
Evans curated an exhibit titled “Visions of the Susquehanna: 250 years of Paintings by American Masters” in 2006. The show’s 40 pieces traveled to Lancaster, York, Harrisburg and Hagerstown, Md. They’re on display in Binghamton, N.Y., until the end of August.
Evans and the Heritage Region got a $50,000 grant from the Pennsylvania Heritage Areas Program to acquire pieces from the exhibit, but they must raise $50,000 in matching funds by the end of the month to make a go of the project.
They’d like to put 11 of the contemporary paintings — ones that don’t need to be returned to museums — into a visitor education center planned for Kline’s Run Park in Lower Windsor Township, part of a Susquehanna Heritage Park along the river.
“Many of the artists in this show are nationally and internationally known, and most of the contemporary paintings were created specifically for this show,” Evans said. “I kept thinking what a tragedy it would be for all these to vanish into private collections when they work so well as a whole.”
Evans said this would form a nucleus of what he envisions as a growing collection of river art that would eventually include photographs and research materials about the art of the Susquehanna.
“It would be nice to have it all in one place if anyone wants to study it.”
Evans said he has always admired the Brandywine River Museum for the way it uses art to promote preservation of the river and the region as a whole.
“They’ve been extremely successful,” he said
He’d like to do something similar for the Susquehanna.
Because the exhibit is nearing its end — and the deadline to get the grant money approaching — they must act fast.
“This is a unique opportunity we have,” said Mark Platts, president of the Lancaster-York Heritage Region. “If we don’t do it now, the opportunity will be lost. They won’t be available in this way again.”
Until the visitors center is built, the paintings would be on display in The John & Kathryn Zimmerman Center for Heritage at Long Level along the river.
The Heritage Region staff have offices in the building, and Platts wants to make at least two of its rooms available for special programs and heritage-related events.
“The idea is that we’ve got a facility here that is fully renovated that can be the initial venue to display the paintings,” he said.
A private donor already purchased Evans’ “Sunset on the Susquehanna” for the Heritage Region collection.
Platts said the art would be an integral part of interpreting the river’s history and culture. “Nobody has ever done this before. There is no Susquehanna collection.”
ADOPT A PAINTING
Wrightsville artist Rob Evans and the Lancaster-York Heritage Region want to create a permanent collection of Susquehanna River art in York County.
Those who donate money to adopt a painting from the Visions of the Susquehanna exhibit will be recognized on a wall label and will receive thank-you gifts including a Susquehanna River Water Trail map and guide, a DVD copy of the “Stories of the Land” heritage film, a signed hardcover copy of the Visions of the Susquehanna exhibit catalog and a signed, unframed Susquehanna River print of their choice by Evans.
For details, visit storiesoftheland.com or call 252-0229.