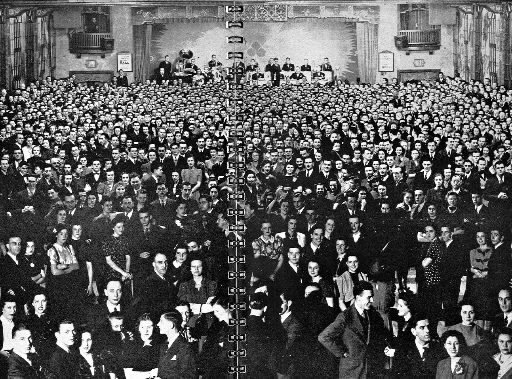 Band leader Kay Kyser drew more than 2,500 fans on March 3, 1939, said to be the largest crowd ever to attend an event at the Valencia. Background post about York’s contributions to the national entertainment world: Cameron Mitchell, Craig Sheffer, Dixie Chick born here.

Deb Hummel, a York Daily Record copy editor and avid auction goer, showed me the Valencia Ballroom’s 10th anniversary book. It celebrated a decade under Tassia family ownership.
Some snippets from the book about the iconic South George Street ballroom:

Frank Sinatra appeared at the Valencia in the ballroom’s heyday – and before he became big in his own right.

Original founding date: 1911, then known as the Coliseum Ballroom.
Tassia ownership: Began in 1928, with the thought it could become a cold storage plant.
Pivotal moment: In March 1929, the Tassias decided to book national acts for music and dancing.

May 2, 1929: First student hop, with the Blue Moon Orchestra performing.
A cool breeze: Summer dancing in 1931 came with air conditioning. “This, we believe, was the first air-conditioned ballroom in America,” the history states.
A new face: In the middle of the Depression, attendance was so high that the ballroom was expanded and dressed with a new facade.
Mal and the gang: Mal Hallett and his orchestra opened the renovated ballroom in October 1934.
A new room: The front part of the second floor is separated from the ballroom during renovations to make for separate function and became known as the Blue Room.
Digging it: The front basement was dug out to build bowling alleys, but table space was in such demand that this lower level became the Rainbow Room.
Region demand: During the Depression, patrons drove from as far away as 200 miles to dance at the ballroom.
Number of appearances by Jimmy Dorsey band: 1
Number by Tommy Dorsey: 6
Duke Ellington: 1
Blue Moon Orchestra: 649
The Valencia was another local cultural or entertainment organization that thrived during the 1930s.
A York Sunday News editorial in July discusses other such starts during those tough years:

York Symphony Orchestra will celebrate its 75th anniversary in a star-studded upcoming concert season.
So will the York Little Theatre.
Forsight Vision, formerly the York County Blind Center, is in the middle of a similar celebration, as is the York Hiking Club.
Crispus Attucks Community Center blew out 75 candles last year. Martin Library will order its 75th anniversary cake in three years.
And others are making anniversary plans.
This convergence of major birthdays leads to the question: What was going on 75 years ago that played a role in the founding of so many major community players?
The short answer is the Great Depression.
And the lesson is that bad times cause a community to come together. Just as families do. Or religious congregations.
“Can it be that individuals in the midst of the country’s severest depression were concerned about those less fortunate than they?” Luther B. Sowers asks in his history of Forsight Vision.
Yes, Sowers wrote. That was the year that the York Downtown Lions Club financed the training of a local blind man to perform as a home teacher.
And the Depression — as did World War II that brought it to an end — placed limitations on travel and the ability to enjoy the good life elsewhere.
So people made the best of things at home.
Interestingly, the end of the destructive Civil War brought a similar period of constructive community activity.
The Children’s Home of York, the York Benevolent Association, York Hospital and York Collegiate Institute, a forerunner of York College, were founded during the war or in its aftermath.

Also of interest:
The Lions state convention took place at York’s Valencia Ballroom in June 1938. This was typical of the scope of the gatherings taking place at the ballroom in those days. In addition to the dancing, the Valencia played host to industrial expositions, business shows and fashion shows. The ballroom continues to play host to dinners and meetings today.