Susquehanna River bridges: ‘Just thought you might enjoy’: Linked in to history, Dec. 8, 2012 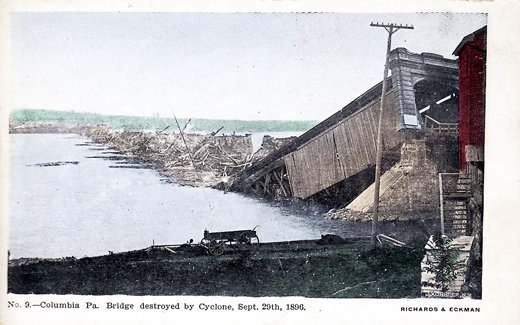 The bridges of the Susquehanna are of great interest to history lovers. Don Wiles submitted this old postcard of the mortally damaged Susquehanna River Bridge in 1896. “Don’t know if you have seen this one or not. But looks like the same construction as in the CW (Civil War). Just though(t) you might enjoy,” he wrote. I’ve seen this picture but never a colorized version, so this is interesting, indeed. This is Susquehanna River Bridge No. 3 in the 1800s. The first was demolished by ice jams, the second by fire (that was the Civil War bridge) and this one by high winds, described as a cyclone. It was replaced by an iron bridge which was scrapped in the 1960s. Its piers remain, running across the river beside Bridge No. 5, the Veterans Memorial Bridge. Bridge No. 6, the modern Wright’s Ferry Bridge, is located upstream. Also of interest: 5 quick facts about the wide Susquehanna River’s long Veterans Memorial Bridge and Past meterological events in York County: Hailstorm broke ‘fully 10,000 panes of glass’

To which, I posted on Google+: ‘Belsnickel delivers nuts and The Office’s cast is full of nuts … .’ Background: Der Belsnickel of the Pennsylvania Dutch: ‘He looked scary and carried a sack of presents’

Building tour, up north: An annual building tour of the Academy Manor and Italian Lake neighborhoods of Harrisburg is set for 1 p.m.-6 p.m., Sunday. “The tour, entitled “Academy Manor: Degrees of Design,” offers an exclusive look into properties in the northern tier of Harrisburg,” a Historic Harrisburg release states. For details: www.historicharrisburg.com .

Did you know? I’m traveling a bit nowadays with my role as Eastern Editor for Digital First Media. So I’ll occasionally point out neat things from my travels on this blog. Like this: Did you know that Shoney’s, the comfort food chain, originated in Charleston, W.Va.? Shoney is short for Schoebaum, as in Alex. Alex is deceased but his widow, Betty, is still active: Philanthropist says giving brings her joy

Forum of the day: The legalization of marijuana is in the news. York County has a long relationship with the drug as these two posts suggest: Cops about marijuana in York, Pa. in 1933: ‘Avoid its use as you would deadly poison’ and National Guard helicopter aids in spotting marijuana plants.

What is your view of legalization of marijuana? (Please comment below.)