At home in Emigsville. Surely, this is York County, Pa. at its best

This is just a good picture. Emigsville looking down on High and St. Mark streets in December 2013. Surely, this is York County at its best. It comes from the camera of the York, Pa., Daily Record’s Paul Kuehnel, who lives in this Manchester Township neighborhood. This scene provides the top piece for The Emigsville Heritage Project,  a community website that Paul has operated with since 2006. It features some wonderful Kuehnel photogs from around town. Also of interest:  Transportation-oriented Emigsville a walkable York-area community with lots of community.

Neat stuff from all over … .
+++
Two bibliographies that may interest you:

An annotated bibliography of Pennsylvania’s conservation history and leaders earlier is available via the Pennsylvania Conservation Heritage Website.

“The bibliographies provide a comprehensive reference of printed materials directly relating to the Commonwealth’s conservation legacy,” a news release states.

And then as a response to a York Daily Record story on Holocaust survivor Mary Berg, we received this helpful bibiliography: “Growing up and Surviving in Nazi Europe: Children during the Holocaust.”
+++
York County icons: Mack’s in Hellam Township and its pet bear are popular York County attractions. Both have attracted widespread reaction, as the following on YDR Facebook’s page indicates:

Hoke House revisited: The outbuildings on Hoke House land have come down but fundraising continues to save the mansion in Spring Grove.

Those are coming in dollars, large and, well, $2 increments. 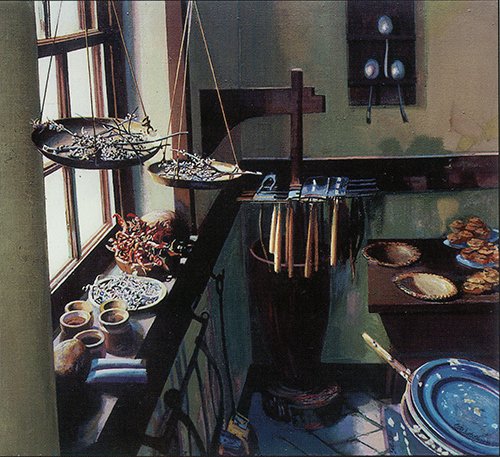 Artist Cliff Satterthwaite’s illustrations are part of book of recipes in Fredericksburg, Va. – ‘Palate & Palate.’ This is titled ‘Wakefield Kitchen’ with the caption: This was the result of several (camera) shooting trips to the reconstructed kitchen at George Washington’s birthplace. I found the window sill composition especially evocative of colonial life and the simplicity, yet complexity, of the foods of the period.’
+++
History Mystery: It would have been Elvis’ 80th birthday this week. He was, in fact, in York County: