Super Moon over the Susquehanna: Linked in with neat York County history stuff, May 7, 2012 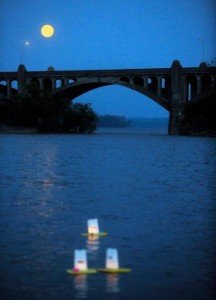 There’s a lot going on in this weekend photograph by York Daily Record/Sunday News photographer Chris Dunn. Floats from a tea light benefit festival move down the Susquehanna River in the foreground. That’s the Columbia-Wrightsville Bridge in the middle. Those are  bridgeless supports of bridges from days gone by near Columbia-Wrightsville’s own support. And there’s the Super Moon above. That’s the closest the moon got to earth since 1993, and AP is reporting it appeared 14 percent larger than normal. Local readers are sharing Super Moon photographs at http://www.ydr.com/gallery. (Click on image to enlarge.) Also of interest: Catch the Gazette and Daily coverage of the moon landing in 1969 and Columbia-Wrightsville Bridge celebrated quiet birthday.

The York County man whose name appears in the nationally known architectural/engineering firm celebrated his 100th birthday on May 4.

“After he blew out candles on a birthday cake, he walked up to the podium and delivered an impromptu talk to those in attendance,” a company news release states. “Don’t make too many like him.” 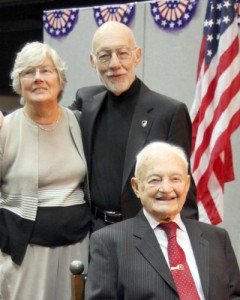 That’s correct. I remember Mr. Horn came to my presentation on some part of York County history several years ago.

I remarked that I should turn the podium over to him because he’s is such a part of that history.

The buildings his firm has built are everywhere – the round bank at Queensgate, Susquehannock High School (and many, many other school buildings in the days of consolidations in the 1950s) and renovations to the old Bon-Ton in York (complete with York County’s first escalator.)

It was more than a little intimidating with Mr. Horn in the audience, but he was most gracious and freely participated.

Down at the station: Check out the area historical railroad stations that are beginning to open to visitors.

Harley reprints: The Harley-Davidson Museum is making history reprints available for folks to purchase on the Web.

Forum of the day, I: More on ice cream – Exchangers are discussing their favorite York County ice cream parlors. Here are places to get homemade ice cream. All this comes on the heels of Seven Valleys getting a marker for its pioneering commercial ice cream production as far back as the 1850s.

Forum of the day, II: The New Eastern Market isn’t that new. It’s been around since 1955. Do you enjoy going to this Springettsbury Township market on Fridays? Which is your favorite – Eastern, Central or Farmers? Please comment below.