My York Sunday News column dealt with the importance of reading, including reading books that help explain the area in which we live.
I put forth the following titles as possibilities for your summer reading list. See what you think. … 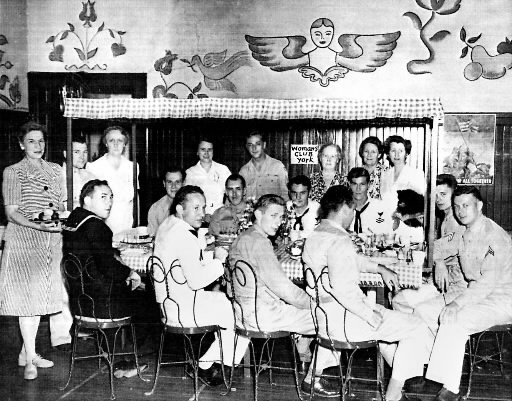 Some couples enjoy time at York’s USO canteen at the old York County Academy gymnasium on North Beaver Street. This postcard touted the USO’s hospitality as home away from home for World War II servicemen. In 1943, Judge Walter I. Anderson served as chairman of the committee overseeing York County’s USOs. Margaret Swartz served as director of the North Beaver Street USO. After the war, York Little Theatre used the gym, which stands today, and academy building, demolished in the 1960s.
“Sticks ‘n Stones: the Myers Family in Levittown” — Daisy Myers’ family moved to Levittown in 1957 — the first black family to do so. The author of this autobiography and her family stood their ground against organized efforts to force them out. Myers later moved to York County, where she resides today. (York County Heritage Trust, pub.)
“Rising From The Wilderness” — Mary A. Hamilton’s
biography probes both the lives of York newspaper owner J.W. Gitt and alter ego The Gazette and Daily. Among other things, it shows how this small-town newspaper owner interacted with elite friends Albert Einstein, Henry Wallace, Gifford Pinchot and Linus Pauling. (York County Heritage Trust, pub.)
“York College of Pennsylvania” — Veteran newspaper writer Carol McCleary Innerst wrote this photo-packed book, part of Arcadia Publishing’s Campus History Series. This work is an interesting read, showing how a school can grow from a single building with a handful of students to a campus that today covers more than 155 acres and schools about 5,000 full-time students.
My column (6/8/08) follows:

Every year, the York Daily Record/Sunday News sponsors a high school journalism workshop.
Every year, I am tasked with sending off a restless roomful of budding journalists, at the end of their long day, with some words of wisdom or inspiration.
After some pondering about a different approach this year, I settled on the idea of walking through my reading stack with them.
It wasn’t an act of self-indulgence or an attempt to inflict pain on a group of tired young people.
A good test for someone considering the journalistic calling is whether they enjoy reading.
Indeed, many good journalists I know are voracious readers.
Perhaps it’s because most journalists know a little about a lot of things, but not a lot about any one thing. So we’re insecure generalists who are always trying to deepen our knowledge pool.
Actually, most journalists realize that reading improves our writing, makes us more self-aware and opens us to new ideas.
In fact, if you ever want to reverse roles and “talk up” a journalist, ask what book’s on the nightstand right then. That’ll loosen them up.
* * *
My reading approach is to simultaneously work through multiple books of varied nonfiction and fiction topics.
I have also discovered books on tape as a way to sample topics and authors that I just won’t get to otherwise.
So I went through my stack with the students, making comments similar to what you just read.
And I share my reading stack with you now, knowing that if you’ve persevered this far, you’re a reader, too. Perhaps you will also enjoy one or more of these titles with the coming of summer and all its reading opportunities.
* * *
— Harry S. Stout’s “Upon the Altar of the Nation: A Moral History of the American Civil War.” I always have a serious history book in the stack. Stout’s saber-like work cuts through sentimentality about this bloody conflict and shows how both blue and gray shed most moral constraints by war’s end.
— Katherine Anne Porter’s “Ship of Fools.” A quality piece of fiction is a fixture in my stack, and I’ve been slowly working through the writing of Porter and other Southerners: Flannery O’Connor, Walker Percy and William Faulkner.
The South’s defense of the indefensible institution of slavery haunts its residents, giving its writers a rich seam to mine. I discovered that Porter’s work is set outside the South and addresses growing anti-Semitism in pre-World War II Europe.
Or perhaps Porter was true to her Southern roots after all: Perhaps she is saying the de-humanization of Jews before the Holocaust is akin to the Southern view of slaves before the Civil War.
— Dietrich Bonhoeffer’s “The Cost of Discipleship.” This is my second time through Bonhoeffer’s provocative treasure, an indication of its penetrating reach.
Bonhoeffer’s books are rare in that they appeal to readers across political and theological spectrums. The Nazis executed Bonhoeffer for complicity in an assassination attempt on Hitler, which gives him the credibility of the martyr that he is.
— Carol McCleary Innerst’s “York College of Pennsylvania.” A work on York/Adams history always rests near the top of my stack. This history starts with the 18th-century York County Academy and follows the school’s path as it grows into York College.
The book reminded me that a four-year college did not operate in York County until 1968, which means the community has enjoyed the positive community-shaping effect of higher education for just 40 years.
— Anna Quindlen’s “Black and Blue” and Lorraine
Hansberry’s “A Raisin in the Sun.” I did not consider how these books of fiction on tape connected until one of the teachers at the student workshop pointed out that “Raisin” is a story of an apparently dysfunctional black family coming together in difficult times.
It occurred to me later that Quindlen’s work on spousal abuse shows an apparently functional white family falling apart in difficult times.
Ah, serendipity spawned by good books.
After I gave my book report to the students, conference organizer and York Daily Record/Sunday News sports editor Chris Otto admitted that he would take the bait.
He told the group that he was then reading Alan Weisman’s “The World Without Us,” a futuristic exploration of what Earth would be like without humans.
I underscored that Chris, as a sports editor reading science, just made my point about journalists and their reading addiction.
MORE ON BOOKS
York Daily Record/Sunday News staff members regularly review what they’re reading at
www.yorkblog.com/books.
QUOTED
“Read. Read good nonfiction books. Read very good newspapers. When you find a reporter whose work you admire, break his or her code.
“Read good detective fiction. I don’t think anybody does narrative structure better than good detective writers.
“Narrative nonfiction is on the rise, and I feel lucky to have spent more than fifty years doing it. I’ve been paid to learn, to ask questions, to think. What could be more enjoyable and more rewarding than that?”
— Excerpted from journalist David Halberstam’s The Narrative Idea” in “Telling True Stories”