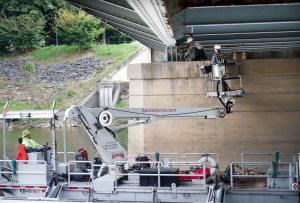 This bucket boat floats on the Codorus Creek recently as engineers examine the Princess Street Bridge in York. The craft is strange-looking, indeed, but not the first boat of such size to float on the waters of the Codorus. From the 1830s until about 1850, Codorus Navigation, a series of dams, canals and slackwater pools, operated from York to the Susquehanna. Rafts, up to 70-feet in length, would navigated this system, carrying passengers and cargo to the creek’s mouth. Operate enough craft like the bucket boat on the Codorus and it might well live up to the name some creek enthusiasts are floating for the creek: the Codorus River.  (See additional bucket boat photo below.) Also of interest: Fisherman about Codorus Creek in York: ‘Was pleasantly surprised by the variety of fish’.

Diners paying their check at OffCenter Grill in the Yorktowne Hotel receive a reminder about York’s past: A free bite-sized York Peppermint Pattie.

This cool-breeze candy was made in a plant on York’s Pine Street for decades.

Today, the silver and blue wrapping hasn’t changed much, nor has the trademark York logo.

But diners enjoying the distinctive chocolate and mint taste would never know that the piece of candy had its origin more than 1,000 miles from downtown York. The wrapper says Hershey makes the candy in Mexico.

Some candy lovers say the York-branded candy no longer has the firmness, the crackle when you bit into it.

All I know is that it’s a good finisher to the normal fine fare at the Yorktowne and is part of the hotel’s efforts to promote its own history as well as York’s.

Exploring York County: Now you can do so at your computer, checking out the Tweets, Facebook and other social media discourse in your town. Check out: Explore your community in York County, visit our social, interactive maps

Forum of the day: Special Olympian Loretta Claiborne was at an area high school this week warning students about hurtful impact of bullying. How bad is the problem of bullying in our local schools? Is it worse than, say, 30 years ago? Please comment below. Background: York, Pa.’s Loretta Claiborne about friend Eunice Shriver: ‘She could have gone anywhere, but she wanted to help humanity’

Forum of the day, II: People flocked to the opening of Buffalo Wild Wings in Hanover on Monday, some waiting in line for hours for free wings for a year. What do you make of York County’s hunger for chicken? Background: Harleys and chicken corn soup: The sound and taste of York County, Pa. 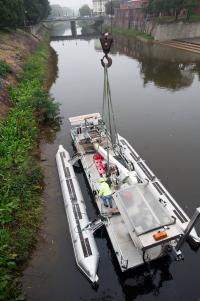 Another view of the strange craft floating on the waters of the Codorus Creek, or Codorus River, as some prefer to call it.