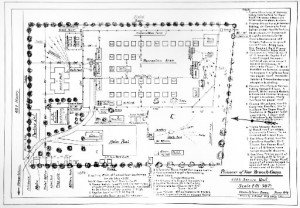 The late Eugene Blevins, of Blevins Orchards, once recalled picking apples on his family’s farm with a dozen German POWs from Stewartstown.
“They were ordinary guys,” he said. “I liked them. But some of them cut swastikas in the apples. We just threw them away. No point in making a big deal about it.”
That one story shows the ambivalence of those living in the area the POW camp filled with German prisoners in the summer of 1944-45.
Mike Argento told this story and others in capturing the Stewartstown scene those summers, in a well-written piece running in the York Sunday News April 14: