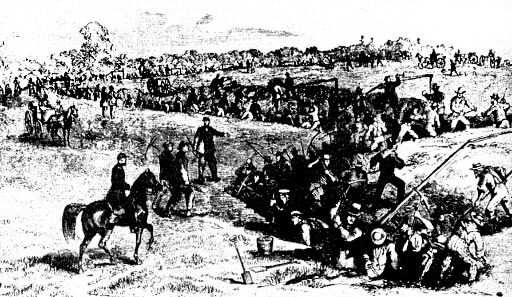 Union military and civilian officials in Pennsylvania rightly viewed the Susquehanna River as a formidable barrier to the Confederate advance to the east. Still, as I wrote in ‘East of Gettysburg,’ they supplemented the mile-wide river with earthworks along its course. Here, an artist who witnessed the excavation shows workers digging trenches near Wrightsville in eastern York County to provide defenders leverage against an anticipated Confederate offensive to capture the bridge spanning the Susquehanna River between York and Lancaster counties. That anticipated attack happened, and Union officers ordered the bridge burned to stop the advance east. Also of interest: Archivist’s finding sheds light on famous note among the roses.
.

Several emailers recently stepped forward with wallets and purses open to help fund a Civil War memorial for the black fighting man who died in the trenches defending Wrightsville in June 1863.

In a column – York County can never forget this unknown Civil War soldier – I had called for the need to recognize this brave man who stood with a handful of others against a rushing, battle-hardened Confederate brigade.

“Thanks much for your well timed weekend article reminding us of the core causes – pro and anti slavery – that were at the heart of the Civil War and the tie-in to the unmarked grave of an African-American soldier in the battle of Wrightsville,” one correspondent stated. He pledged $500 for a memorial and two other correspondents offered money as well.

With funding available, maybe Historic Wrightsville or Rivertownes PA USA could take on the project to mark the site.

Several emailers took strong issue with my contrasting the need for a marker to remember this unsung soldier after a well-intentioned campaign marked the site of an unknown Confederate soldier a few miles away.

“YOU NEED A HISTORY LESSON…GET OFF THE ‘RACIAL BANDWAGON,'” one emailer wrote, “…articles & ‘mis-truths’ such as YOURS, is what keeps this ‘racial ignorance’ going.”

Here is hoping that the 150th year of the Battle of Gettysburg sparks deep discussion rather than such responses about this terrible war.

We should never forget that those same Rebels who blew the head off the black man in the Wrightsville trenches caused terror across York County. The Confederates lobbed maybe 40 cannon shells into Wrightsville, a town they knew was inhabited by women and children.

In York, Mary Cadwell Fisher wrote about the terror welling up from the invasion.

“We knew not how soon might come a signal to unleash the dogs of war in our midst,” she wrote about the men in gray on the streets outside her home, “and give your homes a prey to the invader.”

We remember in this anniversary year that the Civil War was hell for fighting men – and civilians.

Our commemorations must be done thoughtfully. The war’s horrors and the chattel slavery that these invading Confederates defended must be kept fully in view.

If you have an opinion about whether such a monument to the slain soldier in the trenches in Wrightsville is needed or appropriate, please comment below.