Still on the trail of Rebecca at the Well and other fountains around York, Pa. 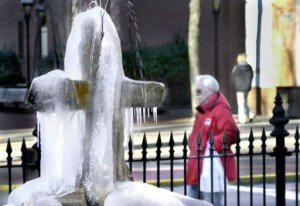 This York Daily Record photo of the fountain in front of Trinity United Church of Christ is obviously not a recent image.  But the fountain is one of the best-known, although perhaps most overlooked, in the York area. Also of interest: When Penn Park had a “stone lighted fish pond.”

The topic today is fountains, playing on discussions that some type of water monument could/should be part of efforts to rehabilitate York’s Continental Square.

– Despite efforts by York Town Square and Universal York’s June Lloyd to locate the Rebecca at the Well statue that for decades stood in Penn Park, no one has come forward to definitely point out it is this or that particularly barn.

Since Rebecca was removed from Penn Park many years ago, there’s the usual questions here and there about what happened to her. If you know, comment below or otherwise let us know. (You’d think Blake Stough and Preserving York, history sleuths, would have he moxie to flush it out.) Perhaps Rebecca could be brought out of hiding to delight folks another day. Perhaps Rebecca could be part of efforts to revitalize the Codorus Creek area of the city.

– There’s a dry fountain in front of the old York County Courthouse, now the county administrative center. One long-time observer of York County seems to remember the presence of a common ladle years ago when the fountain flowed freely.

– A fountain was design into East Market Street’s York City Parking Garage’s original design but seemed to be invisible to many members of the public except for vandals.

– Another often overlooked fountain is the trickle in the waterworks in the lawn of Trinity United Church of Christ. Some long-time observers of York County say that fountain has been flowing as long as they can remember.

There are – were – no doubt many more.

With all the projects under way in and around the city – including Rebecca’s old grounds at Penn Park – there must be a way to bring back a fountain that will delight and cool. Perhaps the York Water Company, coming up on its 200th birthday in 2016, would have a hand in such. 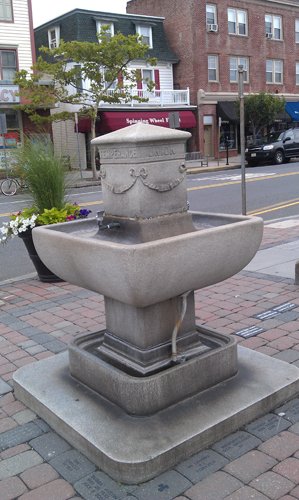 This fountain isn’t in York County. It’s the WCTU – Women’s Christian Temperance Union – fountain in Ocean City, N.J., still a “dry” vacation spot. The fountain, really a monument with a function, is celebrating its 100th anniversary this year. Notice the drain in the lower part of the photo above, provided a cool drink for pet, or perhaps when it was built, horses. Here’s the question. Are there any monuments or markers in York County recognizing the days of the temperance movement? That movement was strong 100 years in York County, too. In fact, the comfort stations in Continental Square are testaments to those days, indirectly. Please comment below. 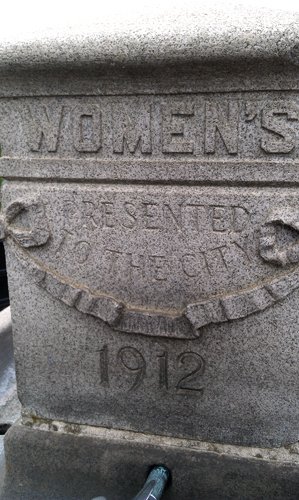