What it was like aboard Southeastern York County’s Stewartstown Railroad 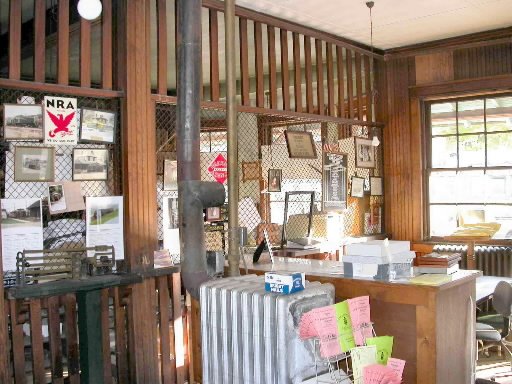 The Stewartstown Railroad station dates back to 1915. Those visiting before the historic railroad’s excursion runs ended in 2004 could see the original waiting room and ticket office. In fact, you can still see the waiting room and office pretty much intact, as this 2009 photograph shows. Background posts: Railroading: ‘It’s something that gets in your blood’and ‘I hope they thoroughly hosed out the cars.’ and Old Baltimore tunnel an intriguing reminder of the ‘Ma’ in Ma & Pa Railroad.
In this blog’s post What happened to York County’s Hungerford, readers learned about Hungerford, a stop on the Stewartstown Railroad.

A York Daily Record story tells about an excursion along the entire 7.2-mile-line, 10 years before that service closed: 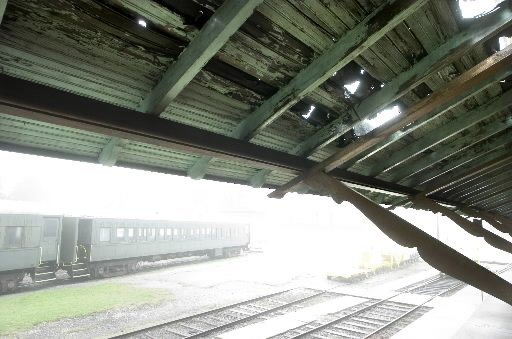 Train cars at the Stewartstown Railroad station sit silent after the rail line closed in 2004.

There’s something romantic about trains that seems to spark the imagination of everyday folks. Maybe that explains why someone would charter an old railroad engine and a couple of passenger coaches for a birthday party. Or why people would bring their children or grandchildren to take a ride on the Stewartstown Railroad on a hot, overcast Sunday afternoon.
The 3 p.m. Countryside Excursion is about a half hour late getting started, but no one in the small crowd seems to mind. With its air-powered horn blowing and its bell clanging, the 44-ton General Electric diesel engine No. 10 maneuvers into place to be coupled with one of the two passenger cars.
Built in 1949, No. 10 was purchased by the Stewartstown Railroad Company in 1972, but before it could be shipped from the York yards down to Stewartstown, Hurricane Agnes struck. Although this southern York County town was spared the brunt of the storm, sections of the then-Penn Central tracks were washed out, thereby severing the vital connection to the rail line that ran between York and Baltimore.
The Stewartstown Railroad, chartered in 1884 and opened for passenger and freight business a year later, was forced to shut down and remained closed for more than 12 years. It wasn’t until the railroad reopened in 1985 that the No. 10 engine finally came home.
Rated at 380 horsepower with two Caterpillar motors, No. 10 now shares locomotive duty with “”Mighty Mo,” a gasoline-powered engine built in 1943, and No. 11, another diesel electric engine built in 1937 and rebuilt in 1967. As No. 10 starts to move down the track, the passengers wave goodbye to those left behind at the station.
This structure, with its old ticket office and freight room, stands just as it did when it was erected in December 1914. The depot, as well as the 1906 engine house and three of the bridges, have been nominated by Historic York to the National Register of Historic Places.
Eric Bickleman, who’s serving as the conductor for this trip, is writing a detailed history of the railroad and says he has a possible publisher.
“”This is one of the few completely intact railroads in the country,” Bickleman says. “”… And it’s one of the few that came back after being closed.”
The train rolls slowly past the remains of a coal yard and a water cistern that were used in the days of steam locomotives, and enters a heavily wooded area. The engine does not exceed 10 miles per hour, and the 7.2 miles between Stewartstown and the other end of the line New Freedom takes about 45 minutes to cover.
For much of the early part of the ride, and occasionally thereafter, a loud, grating sound of metal against metal can be heard beneath the cars, which Bickleman says is due to the straight flanges on the train’s wheels rubbing against the curved track. Bickleman usually serves as fireman or brakeman on the train and has been involved with the Stewartstown Railroad since 1989.
For him, this is a part-time job and part-time volunteer effort. He also works with freight for the Gettysburg Railroad. “”I’ve always been interested in railroads and railroad history,” Bickleman says. “”Even as a little child, when I first saw the models in the hobby shop window. Then I brought by mom here for Mother’s Day, and this brought it all back to me.”
Bickleman’s mother Sally volunteers in the souvenir shop, where visitors can buy guidebooks, post cards, mugs, hand-sewn railroad gloves, hats and even pot holders. The Bicklemans aren’t the only mother-son tandem who volunteers for the railroad. Both 17-year-old car host Matt Mundis and his mother Pat Mundis, who sells tickets, are spending their third summer in Stewartstown.
Except for the professionally-trained engineers, the volunteers who make up the Friends of the Stewartstown Railroad operate and maintain the train and facilities. After running over the iron trestle bridge that dates back to 1870, the train crosses the first of 14 grade crossings. Waiting there is a flagman who waves on the train and signals highway traffic. rrþ The volunteer flagman for this excursion is George Hart, treasurer and vice-president of the Stewartstown Railroad Co.
According to Hart, who has been involved with this railroad since 1969 and served as the first director of the Pennsylvania State Railroad Museum in Strasburg, 12,000 to 13,000 people rode the rails to New Freedom and back last year. The most popular trips, he says, are the Fall Foliage and Autumn Rail Rambles, which run weekends in October and November, and the Haunted Train Rides in October. The train rolls along a steep grade, with trees and a stream down below, and then it begins a 115-feet descent into Deer Creek Valley.
At the bottom of the hill, the tracks start to wind between houses and barns, as this is a more populated area. After passing under Interstate 83, those in the passenger cars can see the abandoned Chase Bronze and Copper Screen Cloth factory to the left, and the still-operational Anderson Feed plant to the right. These companies were two of the biggest customers of the Stewartstown Railroad when it still hauled freight and hooked up with the larger rail lines that continued south to Baltimore. Further along, the Hungerford Station, built in 1925, still stands on the right. Owned by the railroad company, this depot is not used today, but once also housed a post office. Hungerford itself was absorbed many years ago by the fast-growing borough of Shrewsbury.
Leaving Hungerford, the train passes several more industrial sites, until finally, the conductor announces its arrival in New Freedom. The coaches come to rest here while No. 10 circles around to prepare for the return trip to Stewartstown. Several of the passengers move to the other side of the cars to switch views.
Don Matthews, lifelong resident of Stewartstown, is driving No. 10 on this trip. When the railroad reopened in 1985, Matthews assisted in repairing Mighty Mo and in 1988, he began working as a part-time engineer. “”There’s a certain fascination of railroads,” Matthews says. “”It’s a bit of history.”