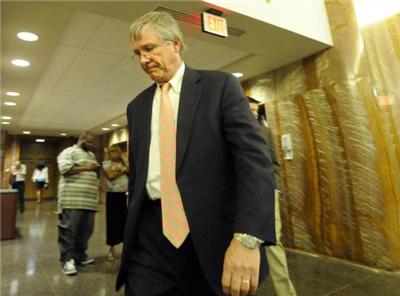 Former Pennsylvania Revenue Secretary and State Rep. Stephen Stetler enters the Dauphin County Courtroom after learning that the jury was coming back in his political corruption trial. He was found guilty of all six charges and could face prison time. Also of interest: For years, York countians part of major court cases. and As Pa. Revenue Secretary Steve Stetler’s political stature grew, his political brand shrank.

The case of Steve Stetler is one of the most significant political corruption cases in the past 30 years.

This case is one that history will remember. Stetler is one of the highest-ranking public officials in the past 50 years from York County, reaching the office of state revenue secretary.

Reporters at the Dauphin County Courthouse summed up this morning’s jury findings in the case of Steve Stetler:

Former York state Rep. Stephen Stetler has been found guilty this morning on all six charges that he used public money for political campaigns.
Stetler was charged in December 2009 with conflict of interest, theft by unlawful taking or disposition, theft of services, theft by deception, theft by failure to make required disposition of funds received, and criminal conspiracy.
Stetler, a former chairman of the House Democratic Campaign Committee, stepped down as state revenue secretary when he was charged.
Stetler’s is the 25th and last political corruption case resulting from then-Attorney General Tom Corbett’s legislative investigation.

Also of interest:
Check out this interactive timeline of the Stetler case.