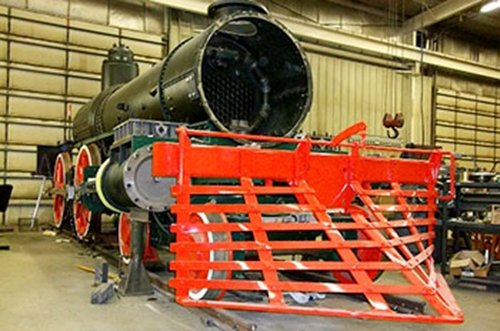 The locomotive that will give the steam for Steam into History’s excursion service is seen in this Nov. 2012 photograph, courtesy of the manufacturer Kloke Locomotive Works. The run between New Freedom and Hanover Junction – the path that Abraham Lincoln took to deliver his Gettysburg Address is expected to be ready by the 150th anniversary of the Battle of Gettysburg at mid-year 2013. (See video of York’s own steam locomotive below.) Also of interest: Will Steam into History Inc.’s locomotive steam into York County’s history?.

An old feed store in New Freedom is being prepared as the headquarters for Steam Into History’s excursion service.

A large crowd gathered at the building recently to hear Scott Mingus present on the history surrounding the old Northern Central line.

So the privately owned excursion service has already meant economic development for York County and will add to the railroading presence in New Freedom, where a county-run museum already operates.

Volunteers are stepping forward, the Cultural Alliance is granting money toward the project and model railroaders are building an HO-scale model of the Northern Central Railway.

The excursion service will be up and running, no doubt.

A couple of questions remain.

Isn’t there a way to involve the Stewartstown Railroad, the struggling former excursion service that connects with the Northern Central in New Freedom? That group is fighting to keep the National Register of Historic Sites railroad intact.

Looking outside today – a Sunday in late January – what type of ridership will travel to New Freedom to pay their fares on a wintry day? If the plan is to run just in warm weather, will that give enough ridership? The Stewartstown Railroad couldn’t make it a go, ending excursion service about a decade ago.

I raised the sustainability question with the late Bill Simpson, when he first told me about Steam into History’s plans.

He thought fares and souvenir sales would provide sufficient revenue, and his passion for the project was evident. Steam into History has backers with the means and that passion shown by Bill Simpson. We can all hope both the means and passion remain so.