Statesman Nathaniel Scudder, after serving in Continental Congress in York, lost his life in battle 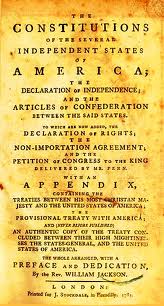 The Articles of Confederation, adopted by Continental Congress in York County, gained wide circulation soon after its printing in late 1777. Here, a London printer combines the document with the Declaration of Independence and other seminal American documents. Nathaniel Scudder was one of the statesmen who signed the document.  Also of interest: Continental Congress struggled into York, and delegates strutted back to Philly 9 months later.

Nathaniel Scudder, 1733-1781, was a doctor, member of New Jersey’s General Assembly and a colonel in the New Jersey militia.

The patriot represented his state in the Continental Congress in 1778-79.

There, he was part of a committee that recommended a day of fasting, humiliation and prayer on April 22.

He was one of the members of Congress who fretted, unnecessarily so, that potential ally France would be put off that America could only adopt, but not ratify the Articles of Confederation.

He pressed for such ratification.

“(A)nd what may be the fatal Consequences to America, when he (France’s representative) discovers … that we are … unconfederated, and, consequently, what our Enemies have called us, a Rope of Sand?” he wrote.

France became an ally, even though the Articles, America’s first framework of government, was not ratified until 1781.

That same year, Nathaniel Scudder was serving in the New Jersey militia. In an engagement against the British at Black’s Point, he was killed leading his men in action.  His death occurred three days before the British surrender in Yorktown, Va.

He was the only member of Congress to lose his life in battle during the Revolutionary War, according to the book “Continental Congress Courageous.”

Three years before his death, while serving in Congress in York, he wrote to his son, Joseph, about “a future of new promise, opportunity and challenge for the brave New World.”

“A scene is opening, my dear Child, in this Country for the greatest imaginable display of Talents and Education, and a young man with your capacity, abilities and learning, can’t fail, under God, if he sets out right, of making a figure in Public Life on the great state of this New World,” he wrote. “Indeed, I cannot help contemplate my sons as shining in future in some of the most splendid Departments of this mighty, rising American Empire, the Glory of the Western World.”

About 135 years later, one of his sons was born.

He became an innovator in the making of newsprint and a prominent newspaperman, serving as chairman of one of America’s largest media companies – MediaNews Group.

Richard Scudder often came to 21st-century York Town, now called York. He would visit the newsroom of the York Daily Record/Sunday News, part of MNG, and take great interest in our projects.

He and I often talked about Nathaniel Scudder.

One moment was particularly memorable.

It came as we drove through York’s Continental Square where his ancestor, the statesman, once sat in Continental Congress in the county courthouse standing tall middle of that intersection.

Richard Scudder died recently at the age of 99, one of those shining sons of Nathaniel Scudder.

Inscription on his tombstone in Old Tennent Churchyard, Monmouth County, N.J., according to Find a Grave:

“IN MEMORY OF THE HONOURABLE NATHANIEL SCUDDER WHO FELL IN DEFENCE OF HIS COUNTRY OCTOBER THE 16TH 1781 AGED 48 YEARS.”