Starbucks, roasting for millions of taste buds, tucked into corner of York County 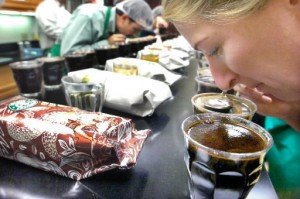 Sherry Dunbar was a green-coffee specialist at Starbucks’ East Manchester Township roasting plant in 2006. Here, she smells unfiltered coffee before sampling it. She is a professional coffee taster, and quality control specialists like Dunbar must approve all beans from around the world before they get the Starbucks stamp. Another Starbucks plant to service the southeast U.S. is expected to open in 2009. Background posts: York County farm vs. factory tension relieved in overnight raid, Images explain changes in York County factories, farms and York County agrarianism vs. industrialization, Part I.

The sign at the Starbucks in Chinatown in Washington, D.C., stated: “Brewed at York Plant, roasted 5/13/08.”

You’ve seen them and probably wondered: What’s the “York Plant?” … . 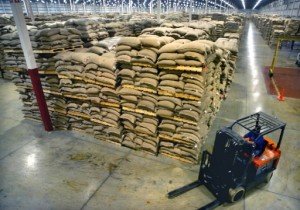 Palettes of 130-pound burlap bags holding raw green coffee beans are stacked in Starbucks’ York County, Pa., warehouse. In 2007, these were the local Starbucks’ stats: The 300,000-square-foot warehouse holds 50 million pounds of raw green coffee. The plant produced an average of 2 million pounds of roasted coffee each week. The plant housed more than 2,500 items in its warehouse; 200 of those are coffee products. It housed manufacturing equipment that included 11 roasters and 12 packaging lines. About 300 full-time employees worked at the plant, Starbucks’ largest. The company’s other roasting plants are in Kent, Wash.; Carson Valley, Nev.; and Amsterdam.
The Starbucks York roasting operation – provider of coffee and all those mugs and related items to stores east of the Mississippi and South America – rests in a remote industrial park in York County’s East Manchester Township.
It resembles other industrial-like buildings nearby.
It’s in one of those industrial parks you see off to the right as you head north on I-83, in the vicinity of York Barbell (Everyone knows where that is, right? The factory with the weightlifter.)
A couple of observations that might stir even more interest about this good York County citizen:
– Across from the plant is an ivy-covered, deteriorating stone barn, relatively rare in York County nowadays. It’s a symbol of the old, agricultural York County, when the “park” was grassy and not filled with modern industrial buildings. This county factory, situated on what was previously farmland, is processing agricultural products from around the world.
– Kenny G. performed at the ceremonial opening of the plant in September 1995.
– York County had no retail store for several months after the roasting plant opened. The Springettsbury store in the old York County Shopping Center, in what is now called York Marketplace, broke the ice and about six stores operate in shopping centers or in Targets around York today.
Occasionally, the local Starbucks plant holds open houses. The following is a York Daily Record/Sunday News story surrounding Starbucks 35th anniversary in 2006:

The fall season hasn’t even started, yet Starbucks’ roasting plant in East Manchester Township has started ramping up production for the holidays.
The Seattle-based coffee maker’s facility has begun making the popular Starbucks Christmas blend — the company’s most popular coffee — and has hired about 62 temporary workers to help with the increased workload. From August through November, the plant typically takes on anywhere from 50 to 80 temporary workers.
“Our business is cyclical based on holiday promotions, seasonal promotions,” said Troy Hoover, distribution operations manager at the plant. “The holidays is a really big promotion.”
Workers were busy on Wednesday when Starbucks offered a rare glimpse inside its York County roasting plant — one of only four in the world — in conjunction with the company’s 35th anniversary.
Huge tubes sucked up coffee beans, packaging machines swished and thrashed, and the smell of roasting coffee permeated the air.
Inside the roughly 700,000-square-foot facility, coffee beans from Asia Pacific and Latin America go through the cleaning, roasting and packaging areas. They are then sent out to 2,500 retail and licensed store locations east of the Mississippi River and in eastern Canada, Central America and South America.
Dozens of 130-pound, burlap bags of coffee beans arrive from the Port of Baltimore to York County in large metal containers daily. Starbucks workers check the containers and bags for insects and leaks. Triangular white boxes are placed throughout the 300,000-square-foot warehouse building to attract warehouse beetles, cigarette beetles and Indian meal moths.
At any one time, the warehouse houses 50 million pounds of raw green coffee. Wooden palettes topped with burlap bags that are filled with raw green coffee are stacked one on top of the other until they reach about 12 feet high.
Inside the roasting area of the plant, the air smells similar to charred beef, and computers operate the machines. Humans occasionally come out of a large room that sits in the middle of the 11 roasters to ensure the manufacturing process is working properly.
“We couldn’t do it without these guys,” Hoover said.
Later in the process, Sherry Dunbar is the person who ensures that Starbucks coffee tastes like what it is supposed to taste like.
She repeatedly dips a soup spoon into a short transparent glass filled with various unfiltered Starbucks coffee blends to detect all the subtleties.
Then she loudly slurps a bit of coffee from the spoon, swishes it around in her mouth like mouthwash and spits it out into a 3-foot-tall spittoon.
“The hardest part is learning the definitions or descriptors,” she said. “When tasting coffee, you’re looking for acid, body, flavor and aroma.”