Star Barn’s relocation a plus, even if not in York County 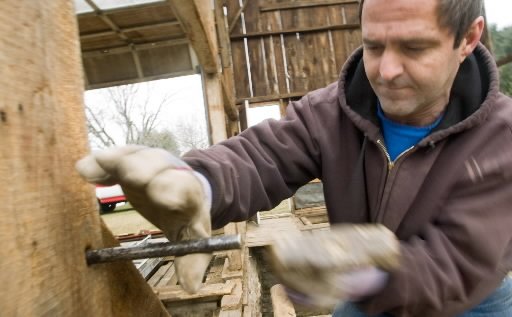 John High removes a wooden peg from a barn in Manchester Township. His Lancaster County-based company is also dismantling the best-known of area barns – Star Barn in Dauphin County. Background posts: ‘It’s so sad to see such a great piece of architecture fall down’ and York County boasts of agricultural prowess.
It looks like the Star Barn, that Dauphin County landmark so familiar to York countians traveling to Harrisburg International Airport, won’t be re-located to York County.
The York Daily Record/Sunday News even urged in an editorial that the preservationist group that owns the Star Barn move the barn to the Horn Farm, site of a future ag museum.
The Horn Farm’s barn burned some years ago, taking away a key asset at the proposed museum… . 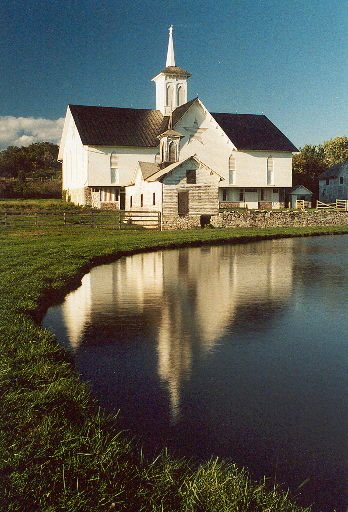 The Star Barn will be moved to another, yet unspecified site. It is listed on the National Register of Historic Places.

The 1872 Star Barn, which has been listed among the state’s most endangered historic properties, would restore that loss and have visibility in a highly trafficked area along Route 30 in Hellam Township.
The preservation group plans to dismantle the Star Barn and re-assemble it at a yet unspecified site. But the group says that site won’t be in York County.
Still, it’s wonderful that this regional treasure will be saved.
So, if the Star Barn isn’t coming to York County, at least the firm slated to dismantle the barn is doing work around here.
The York Daily Record/Sunday News caught up with The Barn Saver, at work on a barn in Manchester Township. Unlike the Star Barn, the local Amspacher barn will be dissassembled and sold piecemeal to furniture makers and restorationists.
The story (1/3/08) follows:

Fifty years ago, the red barn in Manchester Township was full of life.
Chickens, cows and sheep found shelter there. It was a place where Nancy Amspacher, as a child, played in the straw and considered the sheep her pets.
But the barn’s function was lost long ago after Amspacher’s father fell ill. It came to be used as a very large shed. Even if someone wanted to fill it with farm life today, they couldn’t. The land is zoned residential.
The barn is coming down.
“It’s got a lot of memories, but it is time,” said Amspacher, who lives in a house nearby with her mother.
The turn-of-the-century barn, with its wooden walls and soaring beams, is being removed from the property in much the same way it went up: piece by piece.
It’s being dismantled by John High, owner of The Barn Saver, the Lancaster County company also taking down the Star Barn in Dauphin County.
Each piece of the Star Barn will be tagged so it can be rebuilt. The red barn in Manchester Township, however, will be sold piecemeal after it is disassembled. The vintage wood and parts have value to furniture makers and those who restore old buildings.
High has been taking down barns with his hands, a few tools and a couple helpers since about 1990.
Before that, he worked for an excavating company. Sometimes they bulldozed barns, sending the crumpled mess to the landfill.
“It made me very sick to see this happening, and to be a part of it,” High said.
And so began the business of recycling old barns. Even if the pieces can’t be reborn as a barn or a house, the sturdy materials are still useful, High said. There’s no sense in throwing away stuff like solid two-by-fours and massive beams, he said.
Take the Manchester Township barn as an example.
From the outside, the barn shows its age. It sags a little. The tired red paint reveals the brown wood underneath.
This barn’s main treasure was on the inside.
It was built with chestnut beams, a wood that became desirable after a blight in the early 1900s virtually wiped out American chestnut trees. Prices for chestnut flooring made from reclaimed wood can range from $10 to $20 a square foot – more than double the price of other woods.
But the business of saving barns isn’t just about finding the wood of nearly extinct trees. About 90 percent of a barn can be recycled, High said.
Some parts can go to restore old houses. Others are sold to the Amish and Mennonites who use it to make furniture.
“Pretty much almost any barn has materials I can use,” said High, who wouldn’t generalize on the value of parts or whole barns because it varies widely.
As for the barn in Manchester Township, about half the exterior siding planks have been removed, leaving a skeleton-like appearance. All the floor is gone, and a stone basement has been revealed.
It will be strange when the barn is finally leveled, Amspacher said, standing outside. The barn is just a few steps from her home’s back door; the stone foundation rises from a small knoll on the property.
“It’s going to look so different,” she said. “I am going to need to plant some trees there. Something to fill it in.”

LEARN MORE
For more information on The Barn Saver go to http://www.barnsaver.com or call 445-8246. The business will have an exhibit at the Pennsylvania Farm Show, Jan. 5 to 12 in Harrisburg. John High, owner and operator of the business, said he’d be glad to answer questions about his work at the farm show booth or by e-mail at barnsaver@frontiernet.net.