‘No pane, no gain’ and pun very much intended: Linked in with neat York County history stuff – June 25, 2011

Neat stuff from all over … .
Yorkblogger and York Sunday News columnist Gordon Freireich writes in Sunday’s column that one reason that more trolley cars are not around today is that they were burned.
After trolley service shut down in 1939, the cars were taken to the end of the lines and set ablaze, he wrote.
Does anyone have information on this?
The interest in trolleys have resurfaced now that a bus dressed up like a trolley is shuttling people around York… .

When Gordon asked me if I was aware of trolleys still around York County, I told him about a house near Yoe, probably in York Township, that was built incorporating four trolley cars.
A reader suggested that I go out there and take a look. And sure enough, you can see the house with the rounded ends of what appear to be trolley cars protruding.
The house is obviously on private property, and I haven’t had the opportunity to knock on its door to ask for a tour.
If anyone know anything about this house, please comment below or email me.
The mills of York County: Terry Koller and Ray Kinard, the “K-team” of mill specialists, will present on their topic at 7 p.m, July 18, at the West Manchester Township Historical Society’s meeting. The meeting is at the West Manchester Township Municipal Building.

Dillsburg Tribute to the Greatest Generation: As the 70th anniversary of Pearl Harbor approaches, the Northern York County Historical and Preservation Society is planning a special event to honor the local heroes of World War II.
A society releases states that a “Tribute to the Greatest Generation” will be held Aug. 13 at Dill’s Tavern. The tribute begins at 9 a.m. with a number of displays, including reenactors and living historians, WWII era vehicles, military art prints and a ‘Wall of Honor’ that features local veterans’ WWII histories and photos. There is no admission charge to the exhibition.
The tribute is still accepting historical records of Dillsburg-area veterans. Please contact Doug Riley at rdougr@aol.com for more information.
Blog post of the day: Don’t miss: Joe Paterno to Extreme Makeover to Hersheypark, Def Leppard, Keith Urban tickets
Forum of the day: The “Remember When” thread started about three years ago with a post on the death of veteran York County newsman Harry McLaughlin. There’s been 210 posts since. Jump on the thread.

This is the scene from the largest of three windows rehabed at Hanover’s Mount Olivet Cemetery.
Archives 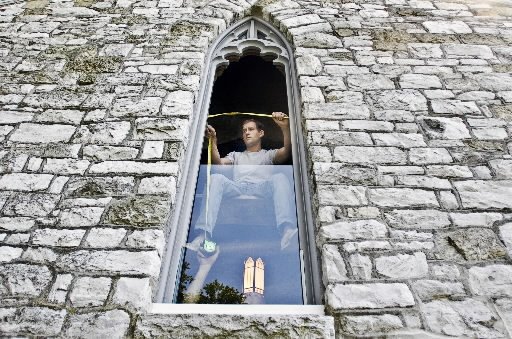 Measuring for a stained glass window in the chapel.