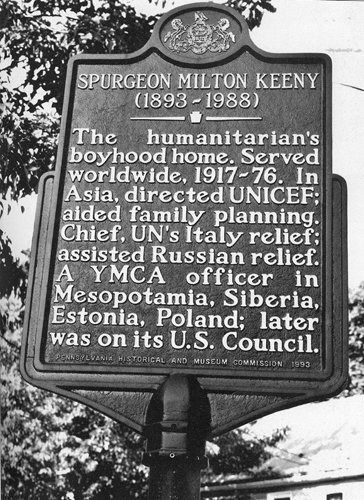 This marker in Shrewsbury, found in Bob Ketenheim’s “Around Shrewsbury,” fetes humanitarian Spurgeon Keeny, one of four Rhodes Scholars with York County links. Keeny was born in the smallest of towns, Tolna, a stop on the Stewartstown Railroad, and grew to international fame. This marker stands in front of Keeny’s boyhood home at 155 S. Main St., in the Southern York County borough. Also of interest: Photographer Craig Walker, Pulitzer Prize winner and former York countian: ‘I always had a camera’.

Shrewsbury’s Jessica Buck saw my recent column about accomplished York countians and wanted to underscore a worthy addition: Rhodes Scholar Spurgeon Keeny, who grew up in the home where Jessica now lives.

“He was once called ‘possibly the greatest humanitarian this nation ever produced,'” she wrote.

So, we’ll add another question to the 10 posed in that recent column:

A. Spurgeon M. Keeny, one of four known Rhodes Scholars from York County (Eugene Ludwig, Gregory Lippiatt and Bruce McClellan later joined him), became UNICEF’s regional director for Asia in 1948. His work contributed to UNICEF’s winning the Nobel in 1965.

– Visit these posts for information about Bob Ketenheim’s other books on New Freedom and Glen Rock. Information from his Arcadia Publishing’s “Around Shrewsbury” appears in the caption above.

– Here’s a Arcadia title exploring the river towns of Wrightsville, Columbia and Marietta.